“I hope it will promote Pahang and the tourism spots which I feel have not been fully tapped,” he said in his speech at the official launch of the Kuala Lumpur-Kuantan flight at a hotel here on Tuesday. 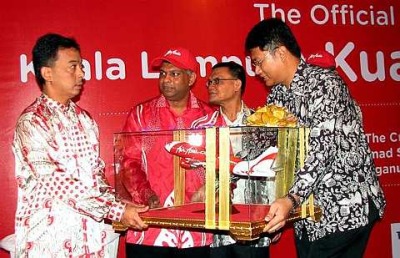 Improving links: Fernandes (second from left) presenting a memento to Tengku Abdullah (left) whileAdnan (third from left) looks on at the launch of the Kuala Lumpur-Kuantan AirAsia flight in Kuantan onTuesday.

Tengku Abdullah urged Tourism Malaysia and the state to do more publicity as the state had beautiful islands, highlands, freshwater lakes, beaches, caves, as well as national and state parks.

“Some of these places do not get extensive promotions.

“Another aspect that needs attention is land and sea transportation to facilitate travel,” he said.

The public and private sectors should come up with a comprehensive plan on projecting Pahang as the place to visit, he added.

“To know Malaysia is to experience Pahang,” Tengku Abdullah said.

He said he did not want to see facilities being built merely for physical presence or to meet a target, adding that they should be well constructed.

“If a hotel is built, it should have good finishings so that visitors will feel the time and money spent here is worth every sen.

“The same attention must be given in the delivery of food and ensuring a clean setting for diners,” he added.

Speaking to reporters later, Tengku Abdullah said there was lack of billboards in Pahang and other states displaying tourism attractions.

Meanwhile, Fernandes said that AirAsia would work with holiday agencies to deliver packages to promote Pahang.

“The airline is selling a lot of products, including hot food instead of boxed food, and we may introduce some Pahang traditional delicacies,” he said.

He added that there was enormous potential to promote Kuantan as the gateway to the east coast while agreeing with Tengku Abdullah on the need for good land and sea links.