WITH the number of NGV users expected to rise soon, motorists and operators of NGV conversion centres are urging the government to provide more natural gas refilling stations.

They feel that it would not be practical for NGV users to travel freely without the easy availability of natural gas stations throughout the country.

It is learnt that there are only about 150 stations in the country, mostly in the Klang Valley,but the number is expected to increase to 200 by the end of this year. 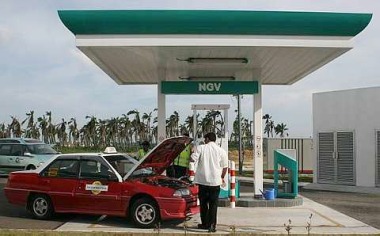 Filling up: A taxi driver fills up at an NGV pump at a Petronasstation.

According to motorist Ishak Junid from Kampung Pendamar in Port Klang, there should be more NGV stations so that motorists will be encouraged to switch to natural gas.

Ishak, who drives a Nazaria, said that before a new Petronas NGV station was opened near his house in Bayu Mas, he used to travel more than 20km to fill up gas from the station at Teluk Panglima Garang.

Ishak, like most NGV users, feels that the current monopoly of natural gas sale by Petronas is restrictive to the NGV motorists.

He said that other fuel companies should be allowed to open up NGV stations so that more people benefited by using NGV.

“I have been able to save a substantial amount of money since switching to NGV a year ago,” he said

Hairul Idris of the Tunas Sanubari NGV centre from Meru said that the existing stations were insufficient for the increasing number of the natural gas fuel users.

“My business volume has increased tremendously over the past week and the waiting list has extended to July. I can only foresee demand increasing in the near future,” he said.

“It will be difficult for users to refill gas unless the stations are available everywhere,” Hairul said.

S. Poovalagu, from Subang, said that he had installed his Proton Wira with the NGV converter and hoped that he would not be facing problems finding the gas stations.

Poovalagu said motorists should be educated on the benefits of using natural gas so that people would not be ignorant and confused.

Norafizah Haidzir, 34, of Sungai Buloh was very excited after installing the NGV system into her car.

Norafizah said that she had no choice but to do so as the revised petrol price had hit her hard financially.

“I’m looking forward to drive without worrying so much about the cost of fuel and hope there are sufficient gas stations,” she said.