JOHOR BARU: Tourism will be among the vital sectors that will be developed in the Iskandar Malaysia project, says Mentri Besar Datuk Abdul Ghani Othman.

He said the Government had made plans to develop tourism in the mega project in line with its vision of creating a metropolis in the region. 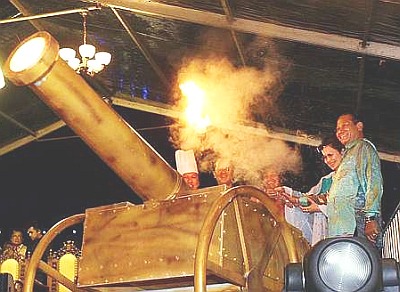 Booming launch: Abdul Ghani (right) firing a cannon to launch the state-level Citrawarna and Citrarasa programme on Saturday while his wife Datin Paduka Prof Jamilah Ariffin (second from right) and Azalina (third from right) look on in Johor Baru.

“We also expect a number of tourism investments in the project.

“We are confident that tourism will be a major boost for the project,” he said after launching the state-level Citrawarna and Citrarasa programme on Saturday.

“This is in line with the state’s identity as the southern gateway to the country.

“The state is rich in culture and has the potential to attract foreign visitors,” she said in her speech at the programme attended by thousands.

Azalina said the programme was part of the ministry’s efforts to promote culture-tourism.

She added that it would have lots of performances to entertain the audience.