Singer makes a promise to fans

SINGING emotional songs can be quite challenging to Winnie Hsin, especially when it tugs at her heartstrings.

The 46-year-old Taiwanese star is known to go all teary when she performs the song Ling Wu.

At one of her concerts in Taiwan, her fans, too, were seen wiping off their tears. 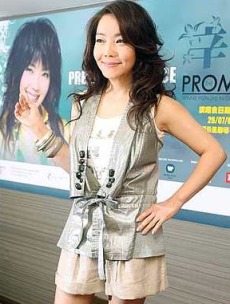 Gets teary-eyed: Hsin promises to give her fans a memorable night at her upcoming concert in Genting Highlands.

“I'd sung the song (Ling Wu) to kick-start the concert but I guess it wasn’t such a good move after all, so at my second concert there, I left it until the last,” Hsin said during a recent press conference to announce her upcoming concert in Genting Highlands.

Hsin has promised to sing Ling Wu at her concert in Genting Highlands but is unsure when she will sing it during her performance.

Other hits that her fans can look forward to enjoying are Wo He Tian You Ge Yue Hui, Liang Liang Xiang Wang , Wei Dao and Shen Qing Xiang Yong, which is a duet that she originally sang with the late Leslie Cheung.

There will also be a guest appearance by Taiwanese singer-songwriter Sky Wu, who has composed songs for artistes such as Vivian Chow, Rene Liu and Jacky Cheung in the past and whose Mandarin hits include Te Bie De Ai Gei Te Bie De Ni and Fen Xiang.

Early birds will get a 30% discount on all tickets except the RM330 tier; this offer is limited to the first 2,000 fans.