SIKH sportsmen from all around the country and Singapore gathered at Georgian Green, the sports field of SMK King George V in Seremban recently to take part in the 57th Gurdwara Cup and Sikh Festival of Sports.

This was the eighth time NSSU was hosting the games. Standing tall: Gurbachan Singh from the Negri Sembilan contingent leading the other teams at the oath-taking ceremony.

“It’s even more significant to us as the NSSU was formed way back in 1933 on this very field.

“We are also grateful to the state government for their contribution of RM50,000 towards the games and the Malaysia Singapore Sikh Sports Council (MSSSC) for acceeding to our request to hold the games here in conjunction of our diamond jubilee,” he said.

MSSSC president Datuk Sohan Singh Randhawa said the objective of the games was to encourage fellowship between participants as well as to promote sportsmanship.

“The Gurdwara Cup started out as a hockey tournament but eventually expanded to include various games such as football, badminton, golf and netball.

“Ever since the formation of the MSSSC, the cup itself is presented to the winners of the inter-state hockey seniors tournament,” he said.

The launch had the Armed Forces’ marching band and raising of the games’ flag and later the crowd was also entertained by a Bhangra performance. 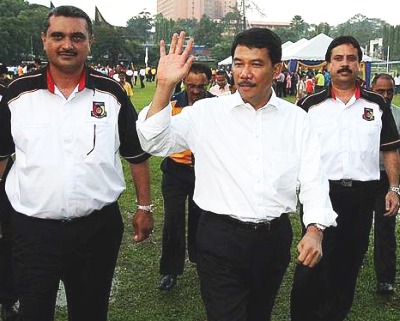 Good luck: Hasan (centre) at the launch of the games.

Negri Sembilan Mentri Besar Datuk Seri Mohamad Hasan, who launched the event, said the state would continue to lend its support to the NSSU especially in organising games as it was a positive activity for youth development.

“Not only is it a wonderful opportunity for participants to build rapport, these games will also help spot budding talent among the younger participants.

“Despite being a small community, many Sikhs have gone on to represent the country. Among them are Karamjit Singh, Santokh Singh, Serbegeth Singh and Sarjit Singh.

“I hope the younger participants will be inspired by these sporting heroes to further develop their talents,” he said.

He said the state government had also agreed to give a 50% discount to the organisers to rent the venues for the games, which included the Seremban 2 Hockey stadium at the Seremban Municipal Council hall.