THE visit to Penang has proved to be a fruitful outing for crew members of USS Cape St George (CG71) and USS Halsey (DDG97).

“I enjoyed snorkelling and swimming in Penang very much. The beaches in Batu Feringghi are beautiul.

“We come here in peace, not for war. We are also here to foster relationship with the Malaysian Maritime Enforcement Agency (MMEA),” said Rabun, who has been out in the sea for 24 years. 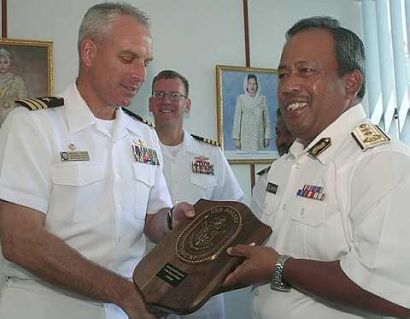 “We love the warm reception from the people. I really enjoyed the sceneries and also the sumptuous food.

“Although we have a great variety of food on board ranging from Italian food to pizza, we still get bored with the 21-day cycle menu,” he said, adding that he loved Penang seafood the most.

The US navy ships paid their maiden visit to Penang on Tuesday during their routine six-month deployment.

They will be heading for the Middle East and are scheduled to reach their San Diego homeport in November.

On another matter, northern region MMEA enforcement chief First Admiral Zammani Mod Amin said MMEA had prepared 18 speedboats on stand-by for response to any search and rescue within 30 minutes.

“Many people are still unaware of our existence since we’re only in Penang for less than three years,” he said.

The public can contact Penang MMEA 04-2626146 over maritime or search and rescue issues.