SP Setia employees band together for the environment

ONE hundred houses at SP Setia Ecopark have been installed with solar panels as part of a study to determine the feasibility of such energy sources. 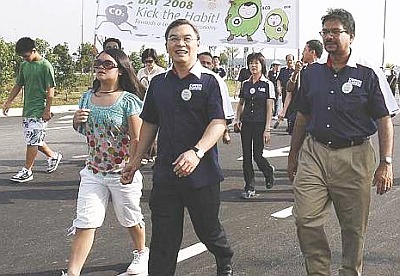 In the lead: Liew (second from right) leading the 5km walk at SPSetia, Shah Alam.

“We have installed the system which comes with two meters to show the level of energy generated and the energy consumed.

“This is still experimental and we expect to put the system to use at the end of the year when the houses are completed,” he said.

Liew added that the move was part of the government’s environmental efforts.

They later took a pledge to show respect and care for the environment and to contribute towards the development of a sustainable planet earth.

Liew also led his employees in planting 2,000 trees, which is estimated to remove 1,600 tonnes of carbon dioxide from the atmosphere.

Each employee was also given free plants to take home to green their surroundings.

He said the company had been incorporating ecology in its projects, which covered everything from the landscape to the layout of the development.

“Developers can play a crucial role to interact responsibly with the environment by building sustainable communities which balance economic growth and environmental protection,” Liew said.

The company had also shut down operations of all heavy machinery at all project sites for the day, to reduce air and dust pollution.

“This cost us RM1mil but we believe no cost is too great when it comes to helping to save the environment,” he said.