TEMERLOH: Participants of the charity ride organised by Malakoff Corporation Berhad arrived safely and on schedule to hand over donations to several charitable organisations and welfare homes.

A total of RM26,000 was distributed to five recipients here during the journey which saw some 80 cyclists travelling a distance of 480km from Gombak to Kuala Trengganu.

Their aim was to raise RM60,000 for the underprivileged and the amount would be channelled directly to selected homes along the route.

Present during the ceremony were the firm’s managing director and chief executive officer Ahmad Jauhari Yahya and its senior vice president Nor Shakiman Muhammad. 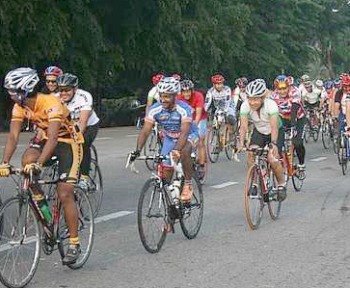 For a good cause: Cyclists passing through one of the routes in Temerloh during the charityride.

Earlier, two orphanages in Gombak were given RM2,500 each shortly before the flagging-off ceremony.

The entourage later arrived in SM Chukai, Kemaman where they handed over another RM28,000 to three organisations and hosted a dinner for 40 hardcore poor children.

The cyclists had a truly rewarding and satisfying experience.

For blogs of their journey, the public can log on to malakoff-cr.blogspot.com.