Lecturer at ease cycling to campus

CYCLING to work may seem like an uphill task for most people but not Universiti Putra Malaysia’s (UPM) Dr Nor Rasidah Hashim.

“It’s not that hard, the terrain here is relatively flat,” she said.

The 35-year-old lecturer from UPM’s Faculty of Environmental Studies has been pedalling on campus for three years since starting her stint there. 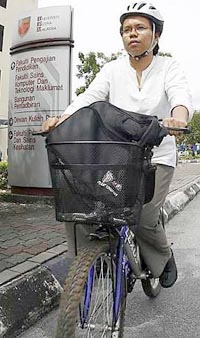 Due to her unassuming exterior, the petite Rasidah is accustomed to being mistaken for a student on her bicycle.

“I am frequently greeted by calls of mana kad matrik (where’s your student card) from the university’s guards,” she admitted with a laugh.

Still, the Negri Sembilan-born lecturer is unfazed by the conventional perception that people of a certain stature are expected to drive cars.

“I suppose I might be viewed as somewhat of an eccentric character but I’ve always believed in making bold choices throughout my life,” she said.

Admittedly, the mounting fear of climate change has made car ownership a symbol of success that is fast becoming obsolete in parts of the world, resulting in a new generation of commuters who prefer public transport and non-motorised forms of transportation such as walking and cycling.

With fuel prices sky-rocketing in recent times, bicycle commuting is not only an environmentally friendly mode of transportation; it is also economical and highly practical for anyone who wants to be fitter, happier and more productive.

Among the famous people who cycle is the newly elected mayor of London Boris Johnson, who has promised to make London greener and “genuinely cycle-friendly”.

The new mayor, who has cycled to work for seven years now, is arguably the most talked-about bicycle commuter in Britain today due to his controversial antics.

The soft-spoken Rasidah, however, is not one to look for fame or attention.

“I cycle for a very simple reason; it’s convenient for me as I live just outside campus.”

In fact, she does not own a car at all, or have a driving licence. When the need arises for long distance travelling, she relies on public transport.

She looks back fondly on her experiences abroad in Duke University and the University of Cambridge, where she furthered her studies not too long ago. “Everybody cycled in Cambridge; it was there that I realised it’s all right to cycle. It’s cool to cycle and the lifestyle I want to pursue is my own personal choice.”

Friends and colleagues were initially awed by Rasidah’s enthusiasm to commute by bicycle; they wondered how she does it in Malaysia’s hot weather.

“Bring a change of clothes if it is necessary, or try to live close to your workplace. Whenever you do something out of concern for the environment, you must have your reasons. Work around the constraints and defend your convictions,” she urged.

Rasidah is, however, painfully aware of the fact that she can’t go on doing it forever.

“My biggest concern is that I don’t know how much longer I can cycle. You have to be healthy because it takes a considerable amount of stamina,” she said, adding that bicycle commuting could be a challenge on Malaysian roads due to the lack of well-designed pavements and cycling lanes.

“Having to compete with motorists on the road is dangerous for cyclists,” she lamented.

“If more cyclists were to take to the streets, we would have a critical mass of people to create a momentum of change,” enthused Rasidah.

“But I always say that individuals can only do so much; beyond that it is the prerogative of the government to take necessary efforts.”

Government-funded programmes such as the Cycle to Work scheme initiated in Britain is a tax incentive aimed at encouraging employees to cycle by offering a beneficial long-term loan of bikes and commuting equipment such as lights and locks completely tax free.

The city of Paris introduced a self-service “bicycle transit system” in 2007 called “Velib” which allows Parisians and visitors to pick up and drop off more than 10,000 bicycles throughout the city at 750 locations.

Meanwhile in Amsterdam, which is known as the “biking capital of the world”, some 40% of the traffic is expected to be from bicycles. The city’s infrastructure is largely designed to accommodate cyclists, and a 10,000-bike parking garage is being built at the city’s main train station.

But is bicycle commuting exclusive only to the more developed European nations? Rasidah is quick to point out that Malaysians are fully aware of the relevant environmental issues such as carbon dioxide emissions and deteriorating air quality.

“Unfortunately there is a difference between being aware and taking action.”

She expressed her belief in the education system as a potential avenue for producing budding environmentalists.

“We offer young people the knowledge that is required in universities, but they must be brave enough to make active choices in their adult life.”

Asked if she could see herself driving in the future, Rasidah said: “Sure, why not?” But she maintains that she would choose a car that is environmentally friendly to minimise her ecological footprint.

Rasidah admits that hybrid cars are rather pricey. However, she sees no harm in doing what you can for the environment if you can afford it.

Asked for tips she could share with potential bicycle commuters, Rasidah stressed on the importance of maintaining safety. “Wear a helmet and cycle in an orderly fashion, avoid cycling in clusters because it can be a nuisance to other road users.

“Know your place on the road and don’t attempt to compete with bus drivers,” she said in jest.