E-ticket for Cityliner buses in Klang

CITYLINER officially launched its prepaid e-ticketing system – a cash-free method of payment of bus fare – in Klang on Saturday. 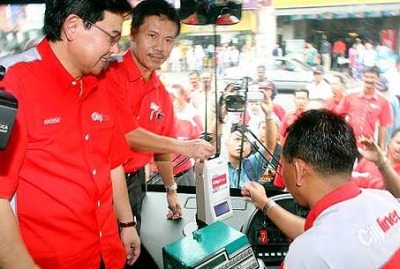 No cash: Alwi (centre) inserting the Fast Pass ticket into a machine on a Cityliner bus at the launchof the E-ticket Fast Pass Cityliner at the Klang Utara bus terminal on Saturday. On the left is MohdNadzmi.

He said the company was extending the system to the Klang Valley following the success of its implementation in Negri Sem-bilan in September last year.

“Electronic ticketing has be-come the preferred method for most bus users in the city.

“It is a better alternative to carrying small change. Our intention is to make it convenient for our commuters,” said Mohd Nadzmi.

He said this at the launch of the E-ticket Fast Pass Cityliner by Entrepreneur and Cooperative Development Ministry deputy secretary-general Alwi Ibrahim at the Klang Utara bus terminal,

KTB, which owns Cityliner, has implemented the e-ticket system in Kuala Lumpur, Klang, Kuala Selangor and Banting since April 1.

Under this system, cardholders will be able to pay for their travel upfront, conveniently. The system also encourages quicker boarding times.

Mohd Nadzmi said KTB had invested US$4mil (RM12.8mil) in developing the Fast Pass, bringing in the technology from Turkey, where it was widely used and had proven to be an effective method.

According to him, KTB is the largest bus operator in the country, owning about 1,500 buses and running stage bus operations in Selangor, Negri Sembilan, Butterworth and Kelantan.

“We are targeting to complete the implementation of the e-ticketing system for all our stage bus operations by October,” he said.

Alwi said it was a good appr-oach by the company to improve its bus services to attract more people to use public transport.

“Most often, it is poor public transportation that forces the public to use their own vehicles, leading to traffic congestion in the city,” he noted.