THE 12 local councils in Selangor have been appointed godfathers to the Selangor contingent preparing for the Sukma in Kuala Terengganu from May 31- June 9.

Selangor State Sports Council (MSNS) deputy chairman Amirudin Shari said the local councils were given the responsibilities to adopt certain according to the facilities available in their jurisdiction. 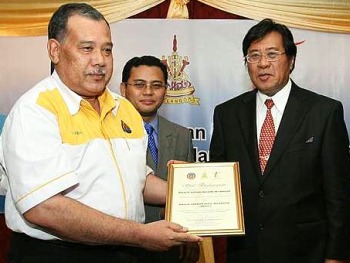 Amirudin said the approach was to give the local councils the opportunity to play a part in the promotion and development of sports.

"We are pleased with the local council for their role in the preparations of the Selangor contingent for the Sukma. This arrangement is also likely to bring the people closer to the local councils,'' said Amirudin.

"We assisted the football team's training sessions as well as provided them with moral support. We hope the football team does well in the Sukma,'' said Tukiman after receiving a certificate of appreciation from Selangor Mentri Besar Tan Sri Khalid Ibrahim recently.

Khalid said the appreciated the support from the sponsors which would be utilised towards the Selangor contingent's preparations and participation in the Sukma.

Selangor, who were the overall champions since 1998, are eyeing the coveted title for the seventh consecutive games. At the last Games in Alor Star, Selangor amassed bagged 53 gold, 44 silver and 56 bronze medals and accumulated 629 points. The MSNS also paid out RM762,750 as incentives to the medal winners.

The Selangor contingent's godfathers for Sukma 2008: