THE Selangor Volleyball Association(SVA) will look into ways tomake the annual volleyballleague more exciting and interesting.

Organising chairman Lam Soon Shen said the league was a big success but that there was room to make the league more challenging and competitive. 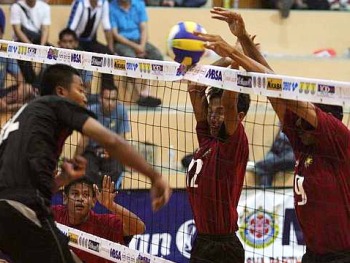 In action: The Armed Forces players (right) blocking a spike from a UKMplayer.

“When we initiated the league, it was to create opportunities for young volleyball players to be involved in a competition. Then we had only eight teams but this year, we introduced a women's category.

Our next step is to attract teams from outside the Klang Valley.

“The league will certainly play an important role in the development of volleyball in the country,'' said Lam after the prize giving ceremony.

The final was a keenly contested one with UKM winning the first set 25-22 but Armed Forces bounced back to even the score 1-1 in the second set with a 25-11 win. 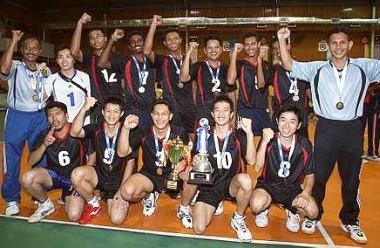 Jubilant: The UKM players and officials celebrating after their win.

But UKM regained their composure and trounced Armed Forces 25-23 and 25-13 to win the Shah Alam Mayor Challenge Cup.