MPAJ did nothing on Ikram report, says MP

BLAME it on the weather, well, at least for now. Downpours were said to be one of the pro-bable causes of the early Wednesday morning incident at Wangsa Heights, Bukit Antarangsa, Ampang.

The incident left four cars damaged after a huge boulder rolled down the cliff on to the parking area of the condominium block. “It is not the first time that such an incident has happened but it has never been so serious,” resident Adrian Godd said.

He felt that such cases could be prevented if there were retaining walls or fences shielding the building.

Two months ago, Malaysia Public Works Institute (Ikram) submitted a report to the Public Works Depart-ment (JKR), which then referred it to the Ampang Jaya Municpal Council (MPAJ).

The report said the area was a high risk disaster area.

“The report included the site where the incident took place but MPAJ did nothing until the accident,” Ampang MP Zuraida Kamaruddin said after being briefed by officers from Ikram during her visit to the site with Gombak MP Azmin Ali yesterday.

She added that MPAJ should take immediate action to prevent similar cases from occurring, as it had been raining for the past few days. 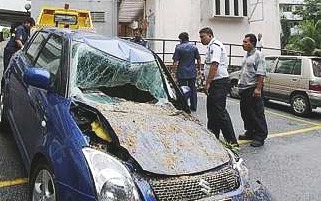 Serious damage: MPAJ officers and curious residents having a closer look at the car.

“We can't take chances. Wire nets should be put up immediately,” Zuraida said.

She was also informed by Ikram that it would be sending a report on the incident to MPAJ yesterday.

Zuraida added that she would ensure that MPAJ tackled the problem as soon as possible.

When contacted, MPAJ deputy president Abdul Hamid Hussain said the council would only be cleaning up the debris while waiting for the reports from Ikram.

“Ikram studied the area and will come up with suggestions for us soon.

“We will only be cleaning up the mud in the compounds and wait till the results are out to decide what to do next,” Abdul Hamid said.

He cited recent downpours as the cause of the landslide as there was no development on the empty land next to the condominium.

Wangsa Heights Management Corporation chairman Syed Fadzil Al’ Shabab was disappointed to find out that MPAJ had not taken any action when they were given the initial report.