KFC Malaysia now has more than 480 outlets in four countries

THE story of KFC Malaysia makes for an interesting read, tracing how it grew from its modest beginnings three decades ago to emerge as the leading Western fast service restaurant operator in the region today.

The first restaurant opened in Jalan Tuanku Abdul Rahman, Kuala Lumpur, in 1973, and from just that one store, the company has expanded to more than 480 outlets in four countries so far – Malaysia, Brunei, Singapore and Cambodia.

KFC Malaysia celebrates its 35th anniversary this year and has much reason to rejoice.

It is a milestone achievement for the company that has built its reputation on the “finger-licking good” fried chicken that young and old alike have come to love.

The catchy song aired on television and the ubiquitous advertisements have nonetheless helped make KFC Malaysia a household name and position it as Malaysia's foremost food service enterprise with fully integrated operations in poultry breeding, processing, and retailing.

But more than just promotions and traditional media branding, the company is constantly reinventing itself by introducing new items to complement the old favourites.

“I would like to record my thanks to several important parties who have helped shape our success,” Muhammad Ali said during the launch of the anniversary bash held at the Kota Damansara drive-thru outlet recently.

The anniversary's theme – Serving Kitchen Fresh Chicken for 35 Years – was coined to draw attention to the fact that chicken is delivered fresh, not frozen, to KFC restaurants.

“First, there is our staff. We now have in 14,000 employees in Malaysia, Singapore, and Brunei, many of whom have been with us for more than 20 years and some, even when we first started!

“Then, of course, we have to thank our customers, our shareholders, leaders within the company, our worldwide franchise holder Yum! Brands, and also charity organisations, which are an integral part of our existence to give back to society,” he said.

Special guests from seven non-governmental organisations were invited to join in the fun at the bash.

Each home received a RM5,000 donation from KFC.

Also recognised were special KFC employees, who included some of the longest serving staff members and those from the KFC community stores that are fully operated by the hearing-impaired.

With the opening of its first outlet in Cambodia, KFC Malaysia also prides itself as the first Western brand to penetrate the country.

“The outlet is about a month old. When it opened, it actually caused a traffic jam in Phnom Penh as people were queuing up!” said Muhammad Ali with a chuckle.

“We are targeting to open three more outlets in Cambodia this year.” he revealed.

According to Muhammad Ali, the restaurant in Cambodia is run by a young, experienced person who has worked his way up the ranks in KFC Malaysia and proven his capability over the years.

“This is part of our career enrichment programme for the staff. We are creating career opportunities for people and want them to grow with this company,” he said.

When asked if the company intended to raise prices in view of rising costs, Muhammad Ali said there was no such plan now but could not tell what the future might hold.

Despite all its achievements, the company is not resting on its laurels. For one, it is planning to increase the number of drive-thru outlets this year, from its current 18.

Last year, KFC Malaysia was honoured with the Franchisee of the Year Award by Yum! Brands, beating KFC franchisees in other countries in the Asian region.

Muhammad Ali said KFC Malaysia was an integrated business, and although it was complex, the company took pride in its strong team who worked hard together.

“There is still room for more chicken in Malaysia, which would only mean that we are definitely going to open more outlets,” he smiled. 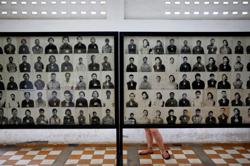