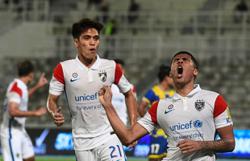 The team beat 36 other groups competing for the award.

The team set up a company, Syarikat Versatile Sdn Bhd which was involved in a variety of small businesses, including selling souveniers, food catering and managing a charity concert featuring Nazri, from the popular nasyid group Raihan.

Led by its managing director Abdul Na’em Suhaimie, 17, the board of directors comprising four other fifth formers, put up an impressive presentation introducing the company profile, promotional and business activities as well as financial status with a cash reserve of RM10,000 in the bank.

The guest of honour for the event was Celcom Malaysia Berhad chief executive officer Datuk Seri Shazalli Ramly, a former student of MRSM Kuantan. He was among the first batch of students in 1974.

He presented the award to the winners after officially closing the convention at MRSM Kuantan here.

The three-day convention started on March 15. Some 592 students participated in the convention - showcasing and selling their products as well as attending talks and visiting factories around town.

The objective was to instill interest and values of entrepreneurship among the students.

Shazalli, in his speech, advised the students not to stop now but to expand their business skills.

He also said the recipe of having successful businesses was the skilful blending of art and science.

“As students of MRSM, you already have a wealth of knowledge in science and scientific methods.

“However, you must also learn to acquire the art in entrepreneurship - learn how to talk, negotiate, open your mind and know what satisfies customers,” he added.

He said that the students now were more fortunate as they had the worldwide web as their library compared to his time, the son of a rubber tapper from Lenggong, Perak who even had to share books with his friends.

Shazalli also said Celcom may get involved in the programme organised by Entrepreneurial and Cooperative Development Ministry next year with the focus on creating awareness on virtual business.