THE Organising Committee of the 42nd Methodist Af-ternoon School Old Boys Association (MASOBA) and the Anglo Chinese School Union (ACSU) Goodwill Games have decided to dedicate the event in Malacca to the memory of the late Tan Sri Mohammed Khir Johari who passed away on Nov 19 last year.

Khir had actively participated in the games for more than two decades.

“The souvenir programme com-memorating the event will carry a pictorial tribute to Khir and there would be a minute's silence as a mark of affectionate remembrance of Khir,” said organising chairman Peter Chua.

The games, to be played at the Malacca Club Rotunda Sports Complex will be held on June 22 and 23.

A welcome reception will be held at the Portuguese Settlement on June 22 followed by a farewell dinner at the Good New Work Restaurant in Taman Melaka Raya on June 23.

The committee also decided that the games would celebrate the 50th anniversary of Merdeka and Malacca was chosen as it was the historical site chosen by the late Tunku Abdul Rahman when he returned from successful talks in London. 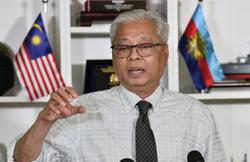