Once a road of salted fish stalls

By DEBBIE CHANdebbie@thestar.com.myPhotos by SAMUEL ONG

From scurrying pedestrians to the enduring century-old shophouses, there is a certain yesteryear charm surrounding Jalan Tun Perak.

The road has undergone three name changes from the initial Java Street to Mountbatten Road and now Jalan Tun Perak.

The name was taken after the most famous “bendahara”, a rank similar to the prime minister, during the reign of the Malacca Sultanate. Tun Perak served four Sultans from 1456 to 1498 and was greatly remembered for his victory in defeating Siamese invaders in 1445 when he was a soldier-statesman.

The most prominent landmark on the road is the Kuala Lumpur High Court that is located on the corner of Jalan Tun Perak and Jalan Raja while the buildings of CIMB Bank and OCBC Bank tower over the older architecture.

Most of the shophouses along the road have been gazetted as national heritage structures.

The Masjid Jamek LRT Station, located right in the middle of the road, has brought about a huge volume of people traffic to the area as people get off to change trains to their next destination or to just shop at the ever-busy Jalan Masjid India.

While most of the shops are now tenanted by new businesses, a few have withstood the test of time and survived the changes throughout the century.

Right opposite the High Court is P.H. Hendry that was established in 1902 and appointed as Royal Jeweller. Further down the road is the Maju Al-Bismi grocery store which has been around for some 40 years.

“There was very little traffic and the shops were very small. They were mostly textile or goldsmith shops as well as grocers,” said Shamsul Haq, the owner of Maju Al-Bismi.

“Cows and people on bicycles used to travel down Mountbatten Road, not cars,” he quipped.

For 92-year-old Choo Swee Leong, a big part of his life revolved around Jalan Tun Perak where his rattan shop Chop Sang Kee is located.

Choo inherited the 80-year-old business from his father and is one of the very few people who have been around from the time the road was called Java Street.

“At that time, there were no cars, only trishaws and lorries to transport goods. The shop front and the street were on the same level and there were many grocers and ‘salted fish’ stalls,” he recalled.

“Later on, when cars became popular, people parked their cars on the pavement in the middle of the street,” Choo said, pointing to the dividers that have replaced the pavements.

Choo is an eyewitness to the gradual development with new buildings coming up year after year.

“The building opposite my shop used to be an opium den some 50 years ago. Many Chinese traders would spend their time there,” he said.

The business owners in Jalan Tun Perak are among the many who had to endure the Japanese Occupation.

“The Japanese would come and force open our doors to take supplies.

“But the good thing was, they would usually leave a note saying that they have taken our things and request that we issue a receipt for them. But of course, when they’re angry, they would just act violently,” he recalled.

Choo is sad that so many things have changed from the old days and that no one really remembers the ways of the past. “We are probably one of the last few oldest shops standing in KL. Who knows what will happen next,” he wondered aloud. 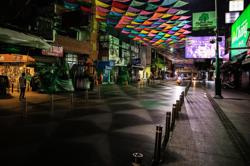