NESTLED between Sri Hartamas and Petaling Jaya North is a hilly area that still maintains a rustic charm and verdant greenery despite the rapid development coming up around it.

The villages can be distinguished by their early Indonesian settlers, whether Minang, Boyan, Javanese or those from other parts of the archipelago.

The typical Malay village atmosphere has made Kampung Sungai Penchala a popular spot for shooting dramas or television commercials.

Like in rural Malay kampungs, the houses here have huge compounds where fruit trees and medicinal plants are grown.

Groups of children can be seen amusing themselves with simple games that village kids normally play in the outdoors.

Driving further into the village, we came upon a clear stream that flows down from the hill, bringing refreshingly cool spring water for the villagers – some of whom use it for their daily consumption.

The hillside is dotted with stylish bungalows belonging to corporate personalities and local celebrities who have chosen to live there to enjoy the area’s verdant green calmness.

The village main road, Jalan Sungai Penchala, is the centre of activity, where sundry shops and food stalls offering a variety of Malay food exist side by side.

It is at these food stalls that the people in the area meet for breakfast, lunch or sometimes dinner to socialise and discuss village activities.

One of the more popular stalls is the 123 Corner stall which serves everything from nasi lemak, roti canai and roti bakar to teh tarik.

“On Fridays, you can have the bananas free,” said Kampung Sungai Penchala Residents Association chairman Datuk Abul Hasan Mohd Rashid, who was having breakfast with some of the committee members.

Just across from this stall is another called “Warung Cherry”.

Located beside a shady cherry tree, the stall’s Sup Tulang is said to be so good that even attracts the lunchtime crowd from Petaling Jaya's golden triangle.

The stall, which also serves up mouth-watering grilled fish and various Malay dishes, is open from noon till night.

Owner Aini Sulaiman said the soup, prepared with beef and bones is cooked for at least two hours. It is then peppered with various spices including lime juice to give it its appetising flavour. It is sold at RM3 per serving.

Aini, who hails from Kelantan, has been running the stall for the past 17 years. She settled in the village 22 years ago after marrying her husband, a local.

Another villager who has made a name for himself in Kampung Sungai Penchala is 66-year-old Zainudin Buyong, or better known as Pak Din Bomoh Urut Patah.

Pak Din is a traditional healer who specialises in the treating broken bones, painful joints and sprains.

His healing method, which he learned from his late grandmother, involves the recitation of Quranic verses.

“I started treating 16 years ago after my grandmother passed away,” said Pak Din whose patients include royalty, VVIPs and people from as far away as Singapore.

Sometimes, his patients who have been warded even call him to treat them at hospitals.

Payment for the treatment depends on the patient, as Zainudin does not demand for any specific amount of payment for his services.

When he is not treating patients, Zainudin tends to his fruit orchard consisting of rambutan, durian and mangosteen trees.

“He is a simple and good-hearted man,” said Abul Hasan who has been treated by Zainudin before.

Another unique feature of the village is that the community consists of 100% Muslims.

To cater to the community’s needs, there are seven kindergartens, a religious school, a primary school, a mosque and several suraus.

A new mosque is also being built in the area through a donation of RM5mil by an individual donor.

Abul Hasan said many landowners in the village became millionaires when part of the land (about 120ha) was acquired under the National Land Code to make way for the Sprint Highway.

He added that in 2004, then Kuala Lumpur mayor Datuk Ruslin Hasan had agreed to acquire land to build a community hall, football field and a water tank plus a few other public amenities for the village.

Abul Hasan said until seven years ago, there used to be only one road leading to Kampung Sungai Penchala - through Taman Tun Dr Ismail.

Now, the Damansara - Puchong Highway (LDP) and the Pencala Link has made the area more accessible.

In a move to preserve Kampung Sungai Penchala as a live-in green belt and to promote eco-tourism, a mountain-bike track and another track for jungle tracking has been created in the area.

The residents are also happy with City Hall’s support in preserving nature by not allowing any development more than six storeys high. 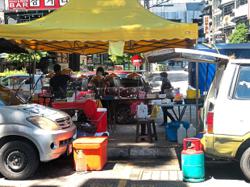 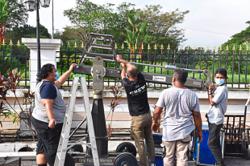