ALTHOUGH the 2006 Fifa World Cup in Germany is more than three months away, the build up to the world's premier football event has already started here.

Adidas (M) Sdn Bhd set the ball rolling by introducing the brand's +10: Together I am Strong communication campaign to the media at KL Hilton, recently.

“The campaign is a concept to be executed leading up to the World Cup. It is about celebrating footballers' individual brilliance with the other 10 members of the team on the pitch,” said the company's managing director Darren Choy.

Target shooting, caterpillar walking, oversized ball juggling and completing player's commercial portrait jigsaw puzzles were among the games lined up for the media at the launch.

Winners were rewarded with prizes comprising the brand's products.

In addition, a member of the media that presents the best +10: Together I am Strong slogan will win a trip to watch the world cup in Germany.

The revolutionary Adidas Teamgeist, which is the event's official match ball, and the new +Predator Absolute boots were also on display.

“It took three years of research and development to produce the Teamgeist ball.

The ball comprises 14 panels compared to 32 panels on conventional balls. It increases the accuracy by 30%,” said Choy.

The +Predator Absolute featuring the Exchangeable PowerPulse technology launched last year is retailing at RM699 per pair and comes with the easy to swap PowerPulse sockliner.

Choy also revealed the +F50 Tunit boots, which will be introduced next month.

“The boots with interchangeable studs and insoles allow customisation and personalisation. A player can assemble the boots according to the demands of the game,” he said.

As the brand aims to create a bigger following among the teenagers for the coming event, budding footballers aged between 15 and 18 years can look forward to participating in the +Challenge grassroots football initiative.

Four legs of five aside, three aside and one-on-one competitions are on the cards with winners given the opportunity to represent the country at the challenge's World Finals in Berlin, scheduled for June.

Those who buy more than RM200 of Adidas products from the concept retail stores stand a chance to win tickets to watch the world cup in Germany.

Besides having teams like Argentina, France, Spain, Germany, Japan and Trinidad & Tobago in the brand's stripes, the brand will also be releasing its fashionable on and off field collection comprising football inspired lifestyle products.

“Our ultimate goal is to position our products so that it will be strongly associated with the sport especially now with football fever reaching its peak.

“The event has a big influence in bringing football fans together to witness the occasion. Besides selling products, we want to share the Fifa World Cup experience with our customers,” said Choy.

Following a month of celebrating the beauty of the world's most popular game with the opening match between host Germany and Costa Rica in Munich on June 9, fans around the globe will be anticipating the outcome of the final on July 9 in Berlin.

A total of 32 teams will be vying for the coveted trophy.

“Adidas is a key part of the game with more than 30 years of working relationship with FIFA. The brand is also the Fifa World Cup official partner and supplier,” he said. 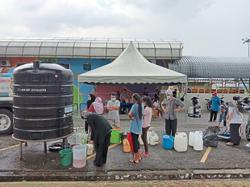