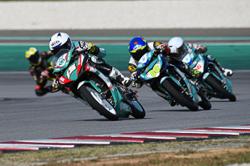 ROSNIZAM Mohd Noor dashed Ahmad Fuad Baharudin’s hopes of scoring his first win this season by snatching the lead from him three laps from the finish line in the penultimate round of the PETRONAS Sprinta AAM Malaysian Cub Prix Championship held at Stadium Utama in Kangar, Perlis.

The Team MMRW Yamaha rider, who created an upset by taking his first chequered flag of the season, maste-red the wet conditions at the 1.234km track when he completed the 12-lap race in a time of 9:41.618.

Third from the starting grid, Rosni-zam started the race well and moved up to second while Fuad was the race leader from the first lap.

The 28-year old rider, who kept his cool and focus, overtook Fuad on Lap 9 and held his nerve to the chequered flag.

“I just can’t believe that I won the race. We did some changes to the suspension before the final race as the track was drying in the afternoon and I am glad that we made the right decision. The team and I went through a lot of ups and downs this season and we faced one problem after another. Final-ly, we have something to celebrate. I am hoping for the same result in Se-pang,” said Rosnizam who was a privateer last season.

The race was a disaster for championship leaders Norizman Ismail, Wazi Abdul Hamid, and Shahrul Nizam Ah-mad Tajuddin. Wazi crashed out of the heats while Norizman and Shahrul could only finish 12th and 7th respectively.

Having collected four points, Noriz-man is still firmly on course for his first title with a total of 107 points in the overall championship standings to Wazi’s 89.

Team Shell KF Yamaha are still in the lead with 178 points while Team SKF Enduro SCK Racing are second with 145 points, and Team PETRONAS Sprinta Racing, third with 100 points.

In the Novice Category, Mohd Hani-zam Mohd Sanusi of Team PETRONAS Sprinta Racing was in his element to give an astounding performance to beat favourites Ahmad Fazrul Sham and Mohd Zanardi Azahar to win the 12-lap race

“I have been racing in the No-vice Category for two years and at last, I got to taste my first victory,” said Ha-nizam.

With the victory, Hanizam improves his overall position to third placing with 75 points and Zanardi, who ma-naged to add 20 points in the standings to 101 points, snatches the overall lead from Fazrul. Fazrul did not finish the race and dropped to second place with 95 points.

In the WIRA EpG Championship, Mohd Iskandar Raduan sealed the title in style by taking his fourth chequered flag of the season.

Despite starting second from the grid, the Team Eveready-Raceline rider got past pole sitter Ahmad Fazrul Sham to lead the race from Lap 1 to the finish line in a time of 09:10.014.

With the win, Iskandar has a total of 104 points in the standings while Fazrul is second with 96 points and third is Mohd Faiz Nawawi with 67 points.

The PETRONAS Sprinta AAM Malay-sian Cub Prix Championship action continues with the final round at Se-pang International Circuit on Dec 4, 2005.