LAUGHTER and cheer filled the foyer of the Mandarin Oriental Hotel ballroom as the advertising fraternity rubbed shoulders with VIPs at the Malaysian Media Awards 2005 last Friday night.

The women were dressed to kill in their glittering designer clothes and brilliant accessories while the men looked smart in their suits.

After warming up to the company, the cocktails and the finger food, they adjourned to the ballroom where the inaugural awards presentation was held.

The event was to honour advertising agencies for their ideas and creativity in media solutions.

Starcom Mediavest walked away with the coveted Grand Prix prize for the best overall entry and another major prize, the Agency of the Year award.

The company also took gold for these other categories: Best Use of Television, Best Use of Sponsorship (both for its commercials for Procter & Gamble) and Best Use of Ambient Media/POS.

Carat Malaysia was also a gold winner in the Best Use of Sponsorship category (for Carlsberg Brewery Malaysia Bhd) as well as in two other categories: Best Use of Magazines and Best Use of Billboards.

The other winning agency was Mindshare Malaysia, which took two awards: Best Use of Radio (for Unilever Holdings Sdn Bhd) and Best Use of Internet (Volvo Car Malaysia Sdn Bhd). 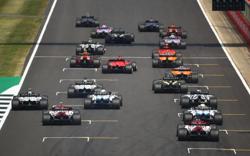 Bottas starts Spanish GP weekend on top of the timesheets