ALOR SETAR: A physically-disabled elderly man was found dead after a heated argument with another man in front of a shopping mall at Lebuhraya Sultan Abdul Halim here.

His body was found outside the concrete perimeter fencing of SK Suka Menanti, about 10m away from the school's entrance.

Kota Setar OCPD Asst Comm Ahmad Shukri Mat Akhir said that the police had received a report about an altercation between two men at the area at about 4.30pm Tuesday (Feb 23)

“Shortly after, police received another report that a body of a man had been found near the fencing of SK Suka Menanti.

“The body was identified by investigating officers as the man who was involved in a quarrel with another man earlier.

“He had serious slash wounds to the neck and a suspect has been detained by the police.

“The suspect is in his 30s while the victim was in his 70s from Tongkang Yard. The sucpect has been warded at Sultanah Bahiyah Hospital.

“The case will be investigated under Section 302 of Penal Code for murder,” ACP Ahmad Shukri said at a press conference at SK Suka Menanti Tueday.

“The police are investigating the motive behind the murder.

“The suspect sustained also sustained injuries in an accident between his getaway vehicle with a motorcycle at Taman Wira Mergong here, " ACP Ahmad Shukri added.

“The suspect has a criminal record with two offences for drug abuse and trespassing, respectively.

“He is also believed to be mentally unsound and a parang was found in the getaway vehicle,” he said. 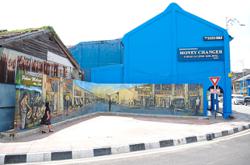