Skudai assemblyman Tan Hong Pin of the DAP said the current system was giving rise to some issues during the movement control order (MCO) especially with the number of individuals gathering at Bank Simpanan Nasional (BSN) outlets to check their eligibility.

He said this was because the current online system to check eligibility was inaccessible to some.

"The government needs to realise that this online system is inaccessible to certain groups of people, mainly the elderly and low-income, which is why I would recommend that an alternative way to be more inclusive," he said in a statement on Wednesday (April 8).

He suggested that the government consider the methods utilised for the Bantuan Sara Hidup (BSH) by the previous Pakatan Harapan government to provide the public with comprehensive information.

"Displaying the name of the recipients bank and bank account would be a good upgrade to the system.

"By doing so, I believe it would reduce the number of people gathering at BSN to inquire about their BPN application status, as well as the bank it will be sent to," he said.

Tan also urged the public to not gather in droves at banks to check their status for the aid, and instead to do an online check or get help from the Skudai community centre by sending them an SMS or via WhatsApp at 010-5351758 or 012-5141758.

Meanwhile in a BPN-related matter, Pasir Gudang MP, Hassan Abdul Karim (PKR), has denied that he had applied for the cash aid, saying he was shocked to find out that he was qualified to receive it.

"I urge the government to look into updating their system to ensure that the aid only goes to those who are eligible.

"And I hope they will swiftly save the billions of ringgit by stopping the funds before it falls into the hands of those who do not need it," he said in a statement Wednesday.

The issue was made known to Hassan after a post went viral on social media of a screenshot of the Inland Revenue board (LHDN) website, showing that he was eligible for RM1,600 in aid. 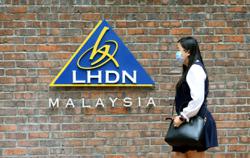 Calculate if you‘re eligible for Bantuan Prihatin Nasional, plus the FAQ