"The clearing is part of the 500.2 ha of land that was de-gazetted from its forest reserve status. However, the land is located in the Kinta Geopark Valley and clearing it will affect the flora and fauna in the area," he said on Saturday (Dec 7).

In February, about 9.95ha of hills at Kledang Saiong was also cleared for an unknown project.

In March, the Perak government said they would continue to push for the 400ha forest replanting project involving forests in Kledang Saiong near Batu Gajah and Bukit Kinta in Gopeng and at Piah near Gerik.

Meor Razak said although the land was de-gazetted by the previous administration, the current government needed to consider all aspects before going ahead with the clearing.

"It puzzled us why it was cleared in the first place. If clearing for development, wouldn't it contradict the state's decision to protect the Kinta Geopark valley?" asked Meor Razak.

He added that he saw logs taken from the clearing, saying that this goes against the practice of logging older and bigger trees.

He said that based on the license board found at the site, the approved clearing started on Dec 1 for 151.49ha of land.

"We wonder when this project received its Environmental Impact Assessment (report).

"As the area is near a residential area, we are afraid that such clearing will affect the nearby community," he said. 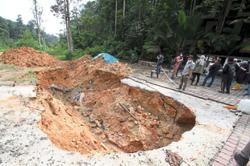 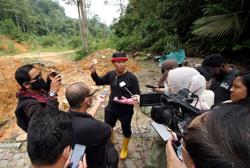