FINALLY Malaysia has a superlative – we are the country with the largest civil service relative to our population in the world.

I hope that this acknowledgment will give the Government the political will to do something about it. It takes a very brave politician to say this as the civil service and their families represent a large number of votes.

So we have improved from Asian champions to world champions.

The bloated civil service has caused government expenditure to increase yearly, leading to the escalating drop in revenue. Already 80% of the Federal Government’s annual budget goes towards operating expenditure and a large chunk of this is to pay for salaries and pensions.

I may be a union guy and should be happy to see more jobs created. But I am also a taxpayer and nothing saddens me more than to see so much of our tax money going towards salaries for a bloated and consequently low-productivity civil service. This leaves much less for development and investments in education and skills training.

It is unfortunate that Johari asserted that the Government had no plans to reduce the number of civil servants although their remuneration and pensions continued to soar.

“We will not reduce our existing civil service. Instead, we should encourage civil servants to undertake more jobs in their respective departments to increase their productivity,” he was reported as saying.

If nothing is done now, the numbers will continue to increase and the Government’s income will gradually decline. It must be noted that when these civil servants retire, the pension bill will shoot through the roof and this is going to be a major perennial issue.

The government is turning to the private sector to generate more revenue to continue to be able to pay the civil servants.

Minister in the Prime Minister’s Department Datuk Joseph Entulu said: “And in the long run, we need investors and the business community to expand our economy. We also need more foreign direct investment so that the private sector will become the major employer for the nation in the future.”

And how come we still have such a bloated civil service after all the privatisation projects during the past three decades?

Such privatisation is touted to save government expenditure and provide a more efficient and cost-effective service to the public. Instead, not only do we have a bloated civil service, costs to the public have gone up.

I experienced this recently when my son wanted to get a motorcycle licence. Despite the Government’s heroic announcement to reduce the fees to RM211 for a B2 licence, it potentially costs much more as that is good for only one attempt and subsequent attempts cost an additional RM175.

So smart driving schools offer a second package at almost RM600, where subsequent attempts cost only RM15. My son friend told me that those who opt for the cheaper package often needed more than one attempt to get the licence.

So we reluctantly opted for the second and more expensive option. Most school-leavers from the kampung who need a motorcycle licence to get a job as a despatch boy cannot afford RM600. 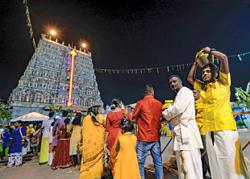