EVERY morning, thousands of city folks begin a new day by queuing helplessly in a congested road system alongside other gloomy-faced commuters who are competing for their road space.

Impatient drivers begin to act irresponsibly with no sense of lane discipline, forcing their way dangerously into minimal gaps between queuing vehicles.

Motorcyclists weave perilously between slower-moving vehicles and frequently claim road space on the opposite side of the road. It seems they now regard part of the opposing lane as a dedicated contra-flow facility for motorcycles.

Accident statistics show how dangerous travel by motorcycle has become, with thousands of lives lost each year. We cannot begin to consider such practices as acceptable in a user-friendly urban transport system.

Billions of ringgit are invested in our transport infrastructure and attempts are ongoing to create an efficient, user-friendly and safe road system in the city. Sadly, it seems that with current road user behaviour, we are far from achieving this goal.

What has gone wrong?

How can we begin to achieve pleasant and safer mobility in the city?

The fundamental problem is not just the transport infrastructure capacity. It lies in the inconsiderate mindset and attitude of road users, who choose to ignore traffic rules and regulations aimed at ensuring their convenience and safety.

Lack of courtesy to other road users and a dismissive attitude towards the highway code are now prevalent and in danger of becoming part of the Malaysian national culture. What road safety campaigns there are, are ignored or ineffectual!

To achieve a user-friendly, safe and pleasant urban mobility system and make the most of the Government’s investment, it is desirable to get back to the fundamentals of changing the attitude of road users.

A better appreciation of risks and the promotion of mutual respect and common sense is needed by all, regardless of whether we are a driver, a passenger, a pedestrian or a public transport user.

In the past, Malaysian culture was particularly admired for its warm and tolerant attitude to others. Let us as a community make a conscious effort to avoid this from being eroded by a growing lack of courtesy to others.

Let us avoid the onset of really poor driving practices and the road rage we see reported in other parts of the world.

Let us pause for a moment to get a better perspective on our lifestyle as it manifests itself in our travel behaviour.

Every road user, irrespective of whether we are motorised or non-motorised, should fully respect each other’s road space and driving rights in accordance with the common sense rules of the road.

With proper respect, good driving practice and discipline, the entire traffic and living environment of the city can be changed for the better.

There are still substantially large numbers of road users who are ignorant of the basic road rules as set out in the Highway Code. Over time, illegal road use is gradually being viewed as a tolerable norm.

These dangerous and frustrating practices require more effective enforcement by our local police and traffic wardens.

More effective enforcement should be aided and backed by a comprehensive electronic enforcement system that will ease the burden of the task we now face as a mobile society.

Do you sometimes wonder why motorcyclists do not seem to be subject to signalised controls and the red lights?

Should a motorcyclist be allowed to encroach into the opposite travel direction of a roadway?

Observations throughout the city suggest these practices have become acceptable on the urban road system.

We must accept the fact that the current enforcement system, which depends solely on police and traffic wardens to uphold the law, will not work efficiently unless road users are properly educated to gain the mutual respect of each other on the roads.

Let us all be respectable and disciplined road users and proud of our own behaviour on the road.

While billions of ringgit are earmarked to improve our urban transport systems and bring them to the highest international standards, the benefits of such investments could be considerably reduced if road and travel behaviour continues to deteriorate.

Despite aggressively promoting public transportation, the rapid growth of car ownership will continue due to changing age profiles of our society.

We must anticipate that the driving population is becoming younger and that young motorcyclists will become car drivers.

The danger is that much of the motorcyclists’ illegal traffic behaviour will thus be gradually transferred to general driving practice and even poorer road discipline and safety.

It is my opinion that while we are investing in long-term urban transportation improvements, we should also seriously focus on road traffic education and the promotion of a courteous road culture.

Let us seriously enforce the law, let every road user realise that safety of urban transportation systems begins from individuals having mutual respect.

If this necessary common respect between fellow travellers and citizens is missing, then all future investment is likely to only partially achieve its objectives, especially if road user attitudes are not improved. 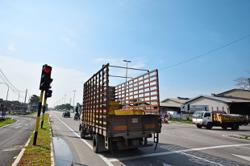