EVERY month, the Kenko Real Organic farm in Lanchang, Pahang, can get up to 10 tonnes of fruits and RM20,000 from their plot of organic jackfruit trees.

Over in Petaling Jaya in the organic garden run by the Centre for Environment, Technology and Development Malaysia (Cetdem), two angled luffa plants have reported sales of RM1,000 since they started bearing fruit.

This is just the tip of the iceberg.

Based on the then reported worth of the retail food and beverage sector of US$15.69bil (about RM67.5bil). This number is expected to grow to US$21.17bil (about RM91.05bil) in 2015. And organic produce, a recognised emerging market trend, is expected to conquer some 500 million consumers in the Asean region.

A proposed Organic World Congress in 2017 to Malaysia is expected to bring about a positive outcome for local organic produce players.

But the decision to go into organic farming is not all about profit.

In 1986, when Cetdem organic farming project coordinator Tan Siew Luang started her organic farm on a smallish plot of land in Subang New Village, she was spurred by the “eating clean” principle. No synthetic fertilisers. No chemical pesticides. And no genetically modified seeds.

Temptation is never far away.

When Tan (pic) started her organic farm on a small land in Subang New Village, she was spurred by the ‘eating clean’ principle – which means zero usage of synthetic fertiliser, chemical pesticide and genetically modified seeds.

Tan recalls the time she had to cycle some 4km to the market when she was still running a farm in Sungai Buloh.

“While passing the other farms, I’d compare the size of my produce with the others. And when yours is smaller, it can be depressing. This is when I’d start thinking why not use just a little bit of chemical?” she recalled.

Organic farming is not just about growing food but for the greater good of health and environment, said Tan. Behind the organic movement is a value system that touches on personal growth and human development.

For one, the consumer is motivated to grow his own vegetables. Ideally, he should also rear livestock, such as chickens for eggs and meat, but in view of restrictions in urban housing areas, it is not advisable.

“Once you grow your own food, you will know not to waste. Do you know how long it takes for a grain of rice to form? Six months. And do you know how much of work goes into planting rice? It is different when you buy food from the supermarket. That is when you have a tendency to cook too much and end up throwing it away because you don’t know how much work the farmer has to do,” said Tan.

At Kenko, which is owned by the International Society for Krishna Consciousness (Iskon), food production is secondary activity. The farm is actually a sanctuary for cows said Iskon secretary-general Simheshwara Dasa.

The society’s first initiative started in 1993 in Teluk Intan when it rescued seven cows from a farmer who wanted to sell them for slaughter.

Shaikh Shanaz and Aishah Sinclair with the fish bowl-potted plant combos to propagate the idea of fuss-free aquaponic kits where you can grow edible herbs such as stevia and peppermint.

The first round of cattle, mostly Friesians and Brahmans, were purchased for RM5,000 per head. Today, there are 60 cattle in the society’s cow protection scheme.

But it must be remembered that in a day, a cow can chow down 15kg of greens, produce up to 12 tonnes of dung and 13.2 litres of urine. How to keep a cow fed and what to do with all that poop and pee?

“That was when we turned to integrated farming as a solution,” said Simheshwara.

The method fulfils one of the standards for organic farming which calls for natural fertilisers and compost where one out of a ratio of three parts, has to be from the protein of either bone meal or animal dung. And cow manure is high in nitrogen, phosphorus and potassium, the very nutrients that make plants thrive.

“The dung and urine is mixed with flour, sugar and earth in 1,000 litre drums and fermented,” said Simheshwara on their fertiliser mix.

The integration method also cuts down the need for the farmer to look at outside sources for compost which require fibre content from tree greens and branches and dung. Though they can be outsourced, due diligence must be done to ensure they too are organic.

But Tan warns that just because organic farming makes use of natural resources, it does not mean that one can throw caution to the wind.

The use of fresh dung for example is not encouraged due to the presence of pathogens. It has to be fermented first. Then, it’s safe.

However, Tan said some conventional farmers were not keen to ferment their animal dung for fear they will lose out on the nitrogen levels – the very thing plants need to look lush.

One also needs to exercise care when it comes to the use of urea which is high in nitrate. Nitrates are converted into nitrites in plants, which according to Cancer Research UK, might cause stomach cancer.

The mission now is to spread awareness on the importance of sticking to what’s natural instead of relying on chemicals when it comes to growing food, stressed Cetdem and Iskon.

“In my time, I remember the school lessons about things like crop integration and rotation. That in a plot one should not just grow chillies alone but a variety of vegetables and herbs. When you practise monoculture, it will attract pests and diseases,” said Tan.

Not many can follow the principles of organic farming, said Tan.

Simheswara readily admits he is able to observe organic standards only for his jackfruit plot.

This is because the organic method requires 30% more labour. In the absence of pesticides, fruits have to be bagged for protection, for example.

At his farm, for the sake of sustainability, furrows are dug around the jackfruit trees so the roots will not be devoid of water. This is filled via gravity feeds from a five million litre water containment uphill.

“But on a long-term basis, it will be worth it, because you are eating actual food. Not chemicals,” said Simheswara.

The focus is now for people to be persuaded to grow their own food, treat it with respect and cringe at wastage.

There might be an answer for the clueless urban condominium dweller.

No digging, pruning or fending off mosquito bites. Just feed the fish and watch your basil grow. This novel idea cost him RM50,000 to start up. He has sold some 400 units since, some of them customised.

Shaik Shanaz started off with an experimental kit at home with two large fibreglass tanks housing some 30 tilapias.

The fish water fed a bed of convolvulus, spinach and bok choy which in turn fed his family over a period of two years. The inspiration came from his childhood days where padi fields also doubled as fish ponds for catfish and fighting fish.

“The most satisfying outcome from this venture is in seeing my daughter eat the stevia leaves off the pot,” said Shaik Shanaz, who had always wanted to impress on his children that food comes from the soil, not the supermarket.

For now, Shaikh Shanaz kits are more ornamental than anything else. But he reckons it’s a small step in the right direction to get people to start growing their own food.

Those keen on starting their own organic kitchen gardens can call Tan at 03-7875 7767 during office hour or email to of@cetdem.org.my. 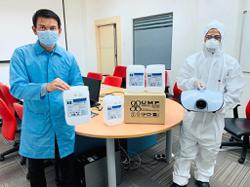