Ruba Zai, a popular fashion blogger from the Netherlands, is one of the nominees for the Icon Ukhwah International Award.

The KL International Hijab Fair 2015 at the PWTC this week puts the spotlight on fashion with an Islamic flavour, reports ZIEMAN.

Islamic fashion, with its colourful and interesting headgear and robes, is becoming quite trendy these days. And as Muslim women become more comfortable with the hijab, Muslim clothing has become more widely available in shopping malls.

Cashing in on the trend, four entrepreneurs led by Mona Din, managing director of Islamic women’s clothing retailer, WOJ (Women of Jannah) Wealth Sdn Bhd, is co-organising the second edition of the KL International Hijab Fair (KLIHF 2015) on May 28.

Touted as the largest Muslim trade fair in Malaysia, the four-day event at the Putra World Trade Centre will showcase the works of more than 100 fashion designers from Malaysia, as well as from abroad.

“We hope KLIHF 2015 will continue to build an exclusive relationship between Muslim consumers and the international business community consisting of designers, brands, retailers and wholesalers for textile, and fabric and accessories suppliers related to Muslimah’s fashion,” says Mona, the businesswoman behind the popular Hajaba label.

The trade fair, which embraces both business-to-business (B2B) and business-to-consumer (B2C) models, is the joint effort of four entrepreneurs, namely Mona, Farrah Adeeba of the Najjah brand name, and Abjda Datuk Zulkifli and Sukinah Datuk Zulkifli of Nainikifli. 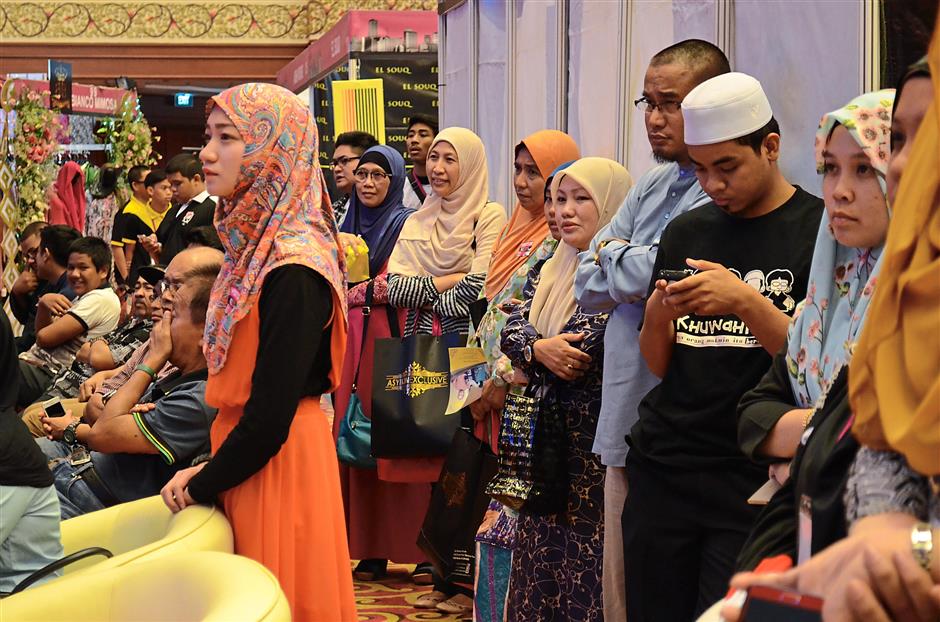 The KLIHF 2015 in Brunei was well received.

Spurred on by the success of the KLIHF 2014 last June, these four gutsy businesswomen are back and gunning for more. They are hoping to top the figures from last year’s event: 250 exhibitors, 120,000 visitors and RM5.3mil in sales.

This year’s fair welcomes international businesses for the first time, with 50 booths taken up by traders from Indonesia, Singapore, Thailand, Korea, Turkey, China and Australia.

“Since KLIHF is the only Muslimah Fashion Trade Fair in Malaysia of international standards, WOJ has been working hard to raise the bar,” says Mona. Another nominee for the Icon Ukhwah International Award at the KLIHF 2015 is Ria Miranda, a fashion personality from Indonesia.

A charity auction is also on the itinerary, and will be coordinated by singer Mizz Nina of Madeena boutique together with fellow celebrities like Ummi Nazeera, Farah Fauzana, Datuk Siti Nurhaliza, Shila Amzah, Neelofa, Vivy Yusof, Ustaz Don and Altimet.

The items that will be auctioned off have been publicised through the social media and displayed at the Madeena and WOJ boutiques in Plaza Masalam and the Curve this month. They will be brought over to the KLIHF venue for the anticipated auction. Proceeds will go to Mizz Nina’s preferred NGO, Viva Palestina Malaysia.

Meanwhile, on the more serious side, is the business forum which will see two business entrepreneurs who have successfully expanded their business into cyberspace talk about “The Secret to Online Success”, two Muslim businesswomen from the fashion industry share their secrets on branding in “Market it Right”, and brand owners giving tips on how to run a successful business in “From Zero to Hero”. Meanwhile the Icon Ukhwah International Award will put the spotlight on hijab-wearing women around the world who have made invaluable contributions in their respective fields whether education, missionary efforts or community service.

“The award theme for this year is the propagation of Islam through fashion where a total of 10 renowned fashion icons who have the highest number of followers in 10 respective countries have been handpicked and invited to participate in KLIHF 2015,” says Mona.

“Our comprehensive line-up and Islamic fashion exhibition booths from various countries will hopefully realise our dream of making Malaysia an international Muslimah Fashion hub. We want to make KLIHF a Malaysian product. With aggressive promotion at the international level, we should get there,” says Mona, who adds that she plans to bring the trade fair to UK and Europe next year.