Business with a passion

The nut butter spreads are healthy and yummy.

IF not now, when? – that’s the mantra young entrepreneur Andrea Ong lives by.

The 25-year-old, who runs her own organic nut butter business called Earth’s Benefit, is a go-getter and strong believer in seizing the opportunity.

“Many people know peanut butter, but I get a fair share of raised eyebrows when they hear ‘nut butter’ for the first time,” laughs Ong, who is also a part-time model and fitness trainer. Made from crushing various nuts such as hazelnuts, almonds, and pistachios, her sumptuous nut butter spreads have no actual butter in them.

“It is high in good fats that can help lower cholesterol levels and contains proteins, vitamins and minerals such as magnesium and potassium which are beneficial for health,” she enthuses. 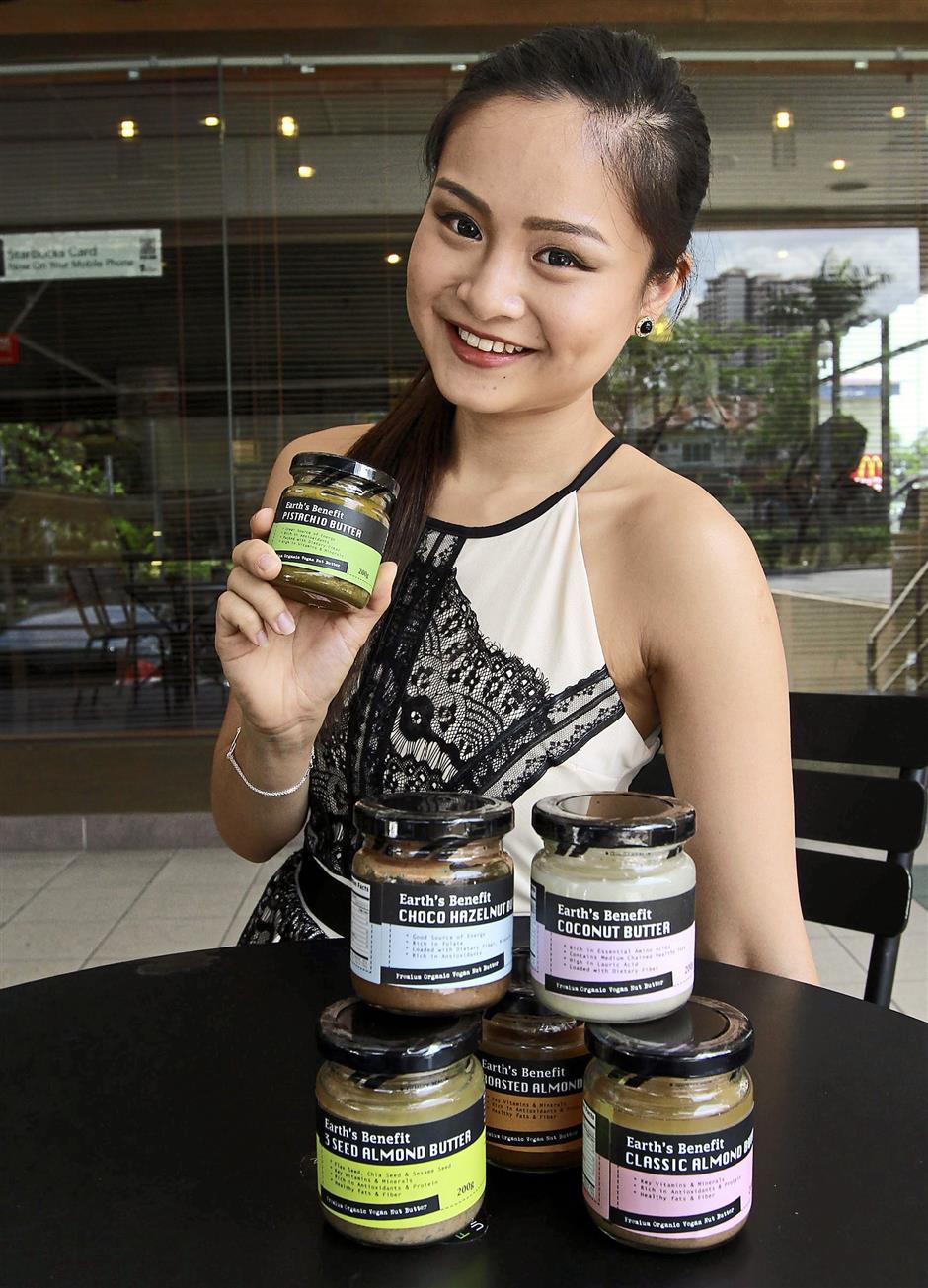 Meeting Ong for the first time, one would never imagine her as being anything but fit and healthy, but she says she only jumped on the fitness bandwagon two years ago. She says her journey into the nut butter business was inspired by her holidays in Australia, where she noticed how passionate the locals were about holistic living and homegrown whole foods.

On one such trip, she tried nut butter at a local health store for the first time and was hooked.

Unable to find the product in Malaysia, Ong decided to make some for her own consumption and gave free bottles to family and friends. The response was so encouraging that she decided to start the Earth’s Benefit brand in January 2014 from her home kitchen with an investment of RM6,000.

“When I started off, I felt that Malaysia was still lagging behind in the whole food market. I wanted to help educate the public on how organic and healthy foods can be delicious as well,” explains Ong.

The name Earth’s Benefit was chosen because Ong wanted to stress that the ingredients used were “pure products coming from the Earth”.

“If consumers can spend so much on supplement pills, then they should go for nut butters that are both yummy and nutritious for their daily intake of vitamins,” she reasons.

Ong adds that her products are dairy-free with no added sugar or preservatives, making it suitable for those with high cholesterol, diabetes or heart problems. She comes up with her own recipes and does not cut corners when sourcing for ingredients.

Her pistachios, for example, are imported from Iran, while the coconuts used in her coconut butter are from Sri Lanka.

“I did try with local coconuts but was unable to achieve the consistency I wanted,” reveals Ong.

She says she is always looking for better alternative ingredients for her nut butters, opting, for example, for sea salt instead of regular salt, and coconut oil instead of palm oil. Her products are sold at health food and fitness supplement stores and select grocers in Selangor, Kuala Lumpur, Sarawak, Perak, Malacca, Singapore, and also online.

“We currently make to order and also prepare them in bulk to be distributed to the shops. Preparation takes about two weeks’ lead time,” says Ong.

The price are a little on the high side, ranging from RM25 to RM45, but Ong says customers today are willing to pay if it is beneficial for their health.

“I believe people today are smarter consumers. There is definitely a movement, especially among the younger generation who are becoming more health-conscious,” says Ong.

Her clientele consists of fitness junkies as well as people from all age groups.

Judging from the brand’s progress, business seems to be booming. Ong – whose current role includes handling finance, sales and marketing and production – says two people joined as partners late last year, and that the business would be moving to a production kitchen in Sentul soon.

Ong, a mass communications graduate with no prior business experience, says starting the business has not been without its challenges.

“Before I invested in an industrial-grade blender, I used a regular kitchen blender. That took up so much time, and sometimes I would be up till 4am preparing the orders,” Ong recalls.

While one may think that nut butters are easy to make, Ong reveals that there is more to the process than meets the eye.

“We have to constantly stop the blender or the ingredients would burn and the enzymes would be lost,” she explains.

Ong says in the beginning people tended to be skeptical of her products because she was young and her products were untested.

However, her belief in the product was key.

“I created this by myself and it was beneficial to my health. I simply wanted to educate other consumers about it, and it turned out to be a profitable business,” she says.

In the initial stages, Ong pushed the product at local markets and bazaars, and approached health food stores and grocery chains. Social media also played a big part in the brand’s marketing.

“I think we are blessed in this generation as social media can be a free marketing tool. It is how you take these outlets and use them,” says Ong.

Balancing the many different fields that she’s active in can be challenging, Ong admits, but she believes that if you’re determined and passionate enough, you will find the time for them.

“Currently, I run this business in the day, but I still do fitness training at night and take up part-time modelling jobs,” she says.

Describing herself as an introvert at heart, Ong said that selling an idea to others takes guts.

“Being confident helps a lot, and I believe I made it because I was very passionate to put the product into the shop so that others might reap the benefits,” she says.

“At the end of the day, we are not only selling a product but also a service. We have our tight-knit nut butter families who share their creations and are very involved with the health community. Helping people every day gives me joy,” says Ong.

Her advice to other young entrepreneurs would be to plan ahead.

“If you have a great idea but you do not plan properly, you are bound to fail. You have to take into account many factors like research and costing, and whether or not it can be sustained in the long run,” she adds.

“Malaysian brands are able to come up with good products, and we should believe in that. If not us, then who?”