Cream of the crop chosen

The selected Junior NBA All-Stars posing with the coaches and VIPs.

JUNIOR basketball player Tan Ee Wan is on cloud nine after being selected as one of the Jr NBA All-Stars.

“I could not believe it after my name was announced,” he said at the closing ceremony of the Jr NBA Malaysia 2015 National Training Camp (NTC) that was held at SJK(C) Taman Connaught (1).

The 14-year-old Bukit Jalil Sports School student, who played centre position, will be joining 13 other Jr NBA Malaysia All-Stars, where they will embark on a once-in-a-lifetime NBA experience with fellow Jr NBA All-Stars from South-East Asia.

The Junior All-Stars have been given the opportunity to watch a live NBA match.

Commenting on the NTC, Tan said he picked up a lot of basketball skills as well as teamwork from experienced coaches and NBA legend Darryl Dawkins.

“From dribbling to shooting, I understand more about the game and I was able to hone my skills here.

“I paid more attention to rebounding and did a lot of drills. A young lad shooting for the basket under the watchful eyes of the coaches.

“The camp was fun and I got to know more about different basketball skills and other players,” he said.

Jr NBA is the NBA global youth development programme that promotes basketball participation and an active lifestyle among children.

The National Training Camp is the culmination of Jr NBA Malaysia 2015 presented by Dutch Lady.

It is an intensive three-day coaching event that provided the top 40 boys and top 24 girls the opportunity to train with and compete against their peers. 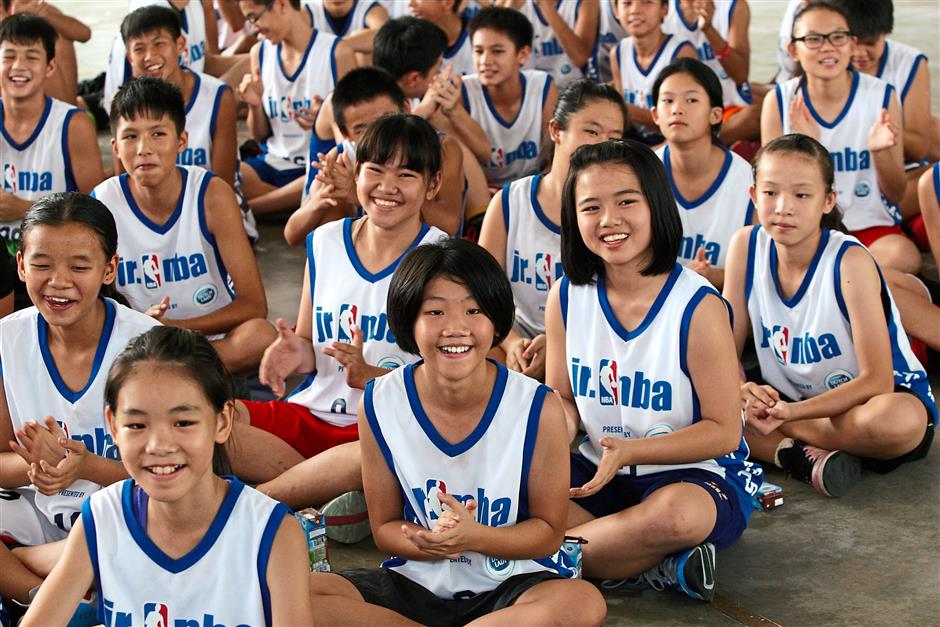 Participants waiting patiently for the results to be announced.

The 64 finalists were selected from 1,087 kids who took part in a selection camp.

“We launched the Jr NBA programme successfully last year and this year, we are look forward to seeing more youths taking part in the programme.

“Our participation in the Jr NBA programme is very much that which advocates a healthy lifestyle by getting at least an hour of exercise a day.

“With this, we will continue our efforts next year for Jr NBA Malaysia 2016,” she said.

The event is supported by the Education Ministry, Spalding and Westports Malaysia Dragons.

Deputy Education Minister P. Kamalanathan said the programme had provided a good platform for youths to hone their basketball skills.

“This inspires youths to do better and push themselves further in any basketball game.

“Some of the national players were groomed from the grassroots like such programmes.

“I hope more private companies will continue to work together with the Government to pinpoint talents in sports,” he said.