Good friends: (from left) Joseph, Paul, Vishaan, Lenny and Danny during the visit to Big Ben.

FOOTBALL fanatics Lenny Foo Hsiao Chung and Vishaan Kumar must be counting their lucky stars. The Year of the Goat started off with a bang for the duo after they were picked as winners of The Star-Tiger FC Real Pitch Contest which began in early January. The contest ran for four weeks and required readers to answer a question on the EPL each week and complete a slogan in week four.

As the grand-prize winner, Lenny won a five-day/four-night all-expenses-paid trip to London to enjoy football like never before. Vishaan, a Manchester United fan from Johor emerged as the lucky winner of Tiger FC’s contest that started in December 2014 on its social media platform where fans were required to send a 15-second video on how they would “Uncage Their Passion for Football” via Instagram. The 19-year-old Vishaan also won a dream trip to London to enjoy a money-can’t-buy footie experience.

The winners had the chance to watch Arsenal play Everton live at the Emirates Stadium in London and also experience a pub game with local fans the day before. They were also taken on a tour to some of the fascinating tourist sights in London and had the privilege to take part in a legends tour of the beautiful Emirates Stadium.

“For most other contests, the winners will be flown to the UK to watch a game and come back, but here we are giving fans of the beautiful game an extra experience to watch a game with English fans in a pub. They will get a chance to differentiate between the local experience with Tiger FC here at our viewing parties with the atmosphere in London with fans who are equally passionate about the game,” said Hway before departing to London. 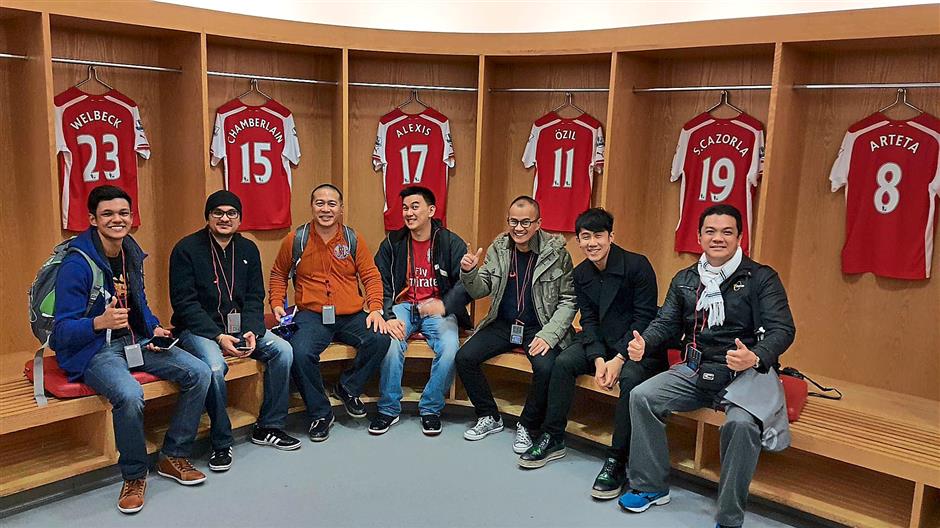 Happy lads: (from left) Vishaan, the writer, Danny, Lenny, Hway, Joseph and Paul in the Arsenal dressing room during the tour of the Emirates stadium.

Arsenal fan Lenny was the happiest of the lot and could not wait to watch his favourite team in action and to go on the stadium tour. “This is a dream come true for me,” said a beaming Lenny. To be the lucky winner is one thing, but to get to watch my idols in action is like wow!, simply amazing,” he said.

The trip started with a London city panoramic orientation tour which included visits to some of the city’s top attractions like a view of Big Ben from Lambeth Bridge, the change of guards at Buckingham Palace and a visit to the stunning Tower Bridge. Apart from the complaints about the cold English weather, everyone was in awe of the attraction and cameras were clicking throughout the tour. The lovely Olivia ensured everyone was taken care of, well fed and kept warm.

Joseph, who was engaged by Tiger FC to create a promotional clip for The Star-Tiger FC Real Pitch Contest on the social media platform Instagram which Vishaan won, was clearly the live wire of the group. He was always busy capturing everyone on video and entertaining us with his antics.

The Emirates tour the next day was a memorable one as everyone got to enjoy the magnificent stadium with its first-class facilities. Statues of famous Arsenal players like Thierry Henry, Tony Adams and Dennis Bergkamp surround the stadium.

Needless to say Lenny was over-the-moon and all smiles as he walked around with pride. The Armoury Store features a full range of replica kits, Arsenal fashion, personalised shirt printing and all things Arsenal are available here while the Armoury Square is an open area in front of the store where one can find thousands of granite stones set in the ground with messages by Arsenal fans from around the world.

The pub viewing party was next as we were brought to The Quays pub to catch Man Utd play Sunderland at Old Trafford. After a hearty meal and yes, more Tiger beer, the match kicked off with fans slowly trickling in and filling up the seats. A Wayne Rooney inspired Red Devils easily disposed of a sorry Sunderland side, bringing joy to the faces of Vishaan, Paul and yours truly. It was even sweeter as the few of us had put a wager at the local bookmaker for Man Utd to win by a couple of goals. Match won, beers going down nicely and winning a few quid, lovely ain’t it! 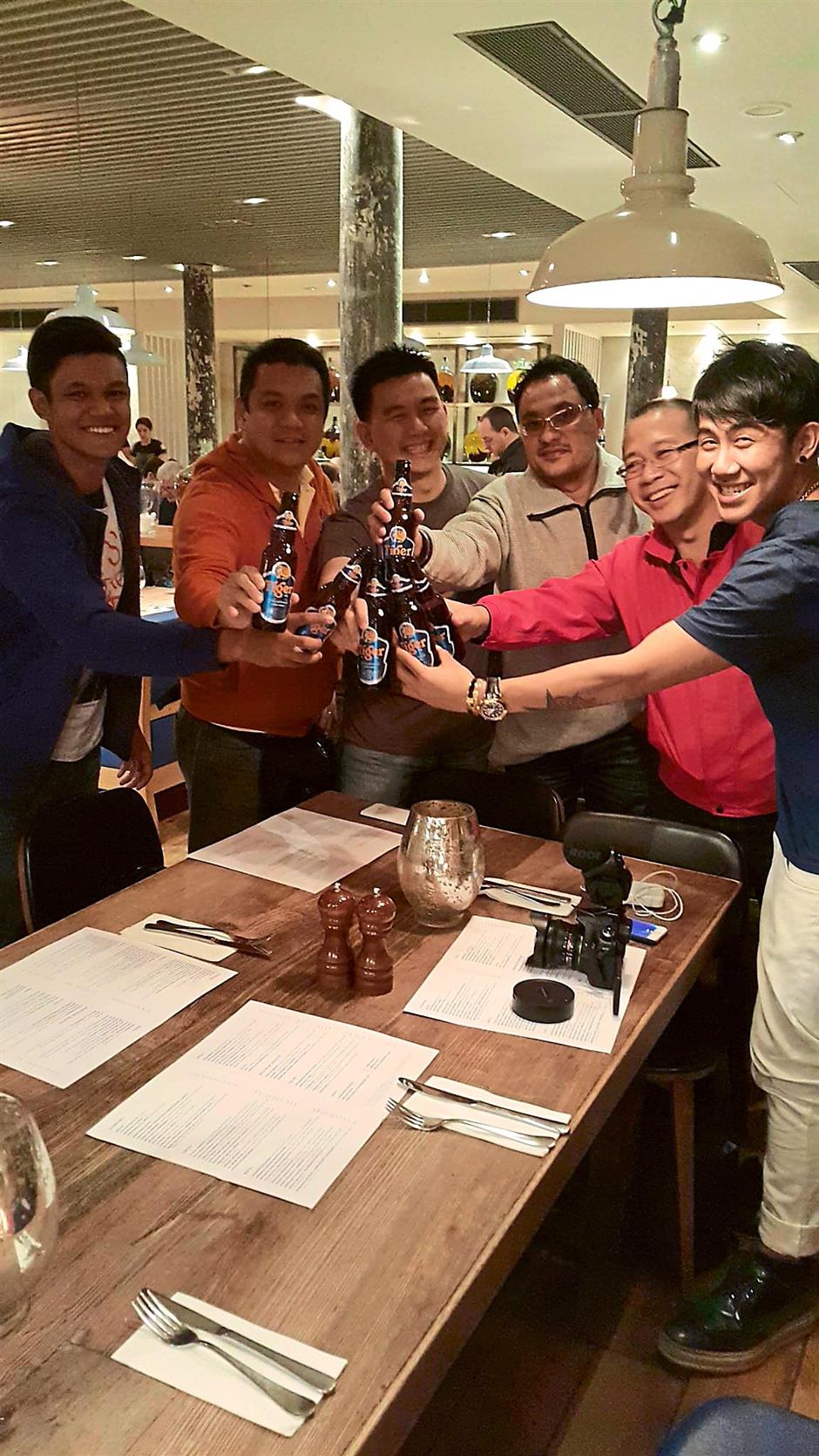 Unwinding: The boys having a blast during one of their nights out.

The highlight of the trip was watching Arsenal live the next day. The visitors that day to the Emirates were Everton and what a match it turned out to be. The atmosphere was electric as fans packed the stadium, singing, chanting and enjoying the game. Our seats were located at the East Stand Turnstile and I must say we had a lovely view of the game. The Gunners deservingly won 2-0 with Olivier Giroud and Thomas Rosicky getting on the scoresheet.

“We played well and I truly enjoyed myself,” said Lenny. I especially loved the fans cheering for the players like when our goalkeeper David Ospina takes a goal kick the crowd goes “Ooooospinaaaaaaaa“, simply brilliant,” said the ever-smiling Gooner.

Hway was touched by the expression and joy on the winners faces. “ This whole experience, the delight on the faces of Lenny, Vishaan and Paul is truly overwhelming. I can feel their passion for the game and their knowledge of football is amazing. I mean they can go on for hours talking about the sport. Now that is passion,” said Hway.

“It has been a long time since The Star and Tiger Beer started collaborating and reaching out to football fans in Malaysia. This contest has enabled us to facilitate to fans by uncaging their true passion for the game. The beauty of this interactive experience with the winners here in London makes me feel very proud that we are engaging with fans of Tiger FC and making their dreams come true,” continued Hway.

Man Utd fans Vishaan, Paul, Olivia and your truly decided to make a visit to Old Trafford the next day and persuaded Lenny to join us for the two-hour trip to Manchester.

It was a dream-come-true to visit the magical stadium and go on a tour of the dressing room, stands, press rooms and pitch. The trip to Old Trafford ended with all of us buying Man Utd merchandise for friends and family at the megastore.

Football fans who are dreaming to be in Lenny, Vishaan and Paul’s shoes are in luck because according to Hway, Tiger FC has plans for future contest where winners can win trips to watch football matches around the region and Europe.

“We are extremely pleased with the response of fans and the quality of entries received for this contest. The message to all fans is do keep a lookout for future dream come true trips and make your way to future Tiger FC viewing parties that are being planned,” said Hway.

Thanks to Tiger FC, three lucky fans enjoyed an amazing money-can’t-buy dream trip to London. You can be the next one! Have a chilled Tiger, on me. Cheers!