This is the right way to hit it: Khoo (crouching, second from right) putting primary school players through their paces in the batting aspect of the game of cricket at a weekend coaching session.

MALACCA: Two retired teachers passionate about badminton and cricket say it is high time to develop a much larger base of potentials and talents for both games at state levels.

In badminton, there has been much concern expressed about the disparity in playing standards and game performances between Malaysia and World No1 Lee Chong Wai and the current second echelon talents who are also still unable to hold their own against players from South Korea, Japan, Taiwan, Denmark and Indonesia.

Former national coach Yong for one is glad that the disbanded coaching and training committee (CTC) is to be brought back into the Badminton Association of Malaysia (BAM) framework.

Yong along with the late Datuk Punch Gunalan spearheaded the CTC between 1972 and 1992 which led to a formidable crop of national players able to match the likes of the then world elite like Liem Swie King, Rudy Hartono, Christian Hardinata, Ade Chandra, Tjun Tjun, Svend Pri and Flemming Delfs.

Among the local stalwarts were James Selvaraj, Phua Ah Hua, Moo Foot Lian, Saw Swee Leong, Dominic Soong, Kwek Chiew Peng and the Sidek brothers, Misbun. Razif and Jailani. It was this crop of players that led Malaysia to the Thomas Cup final in 1976 and to win the championship in 1992. 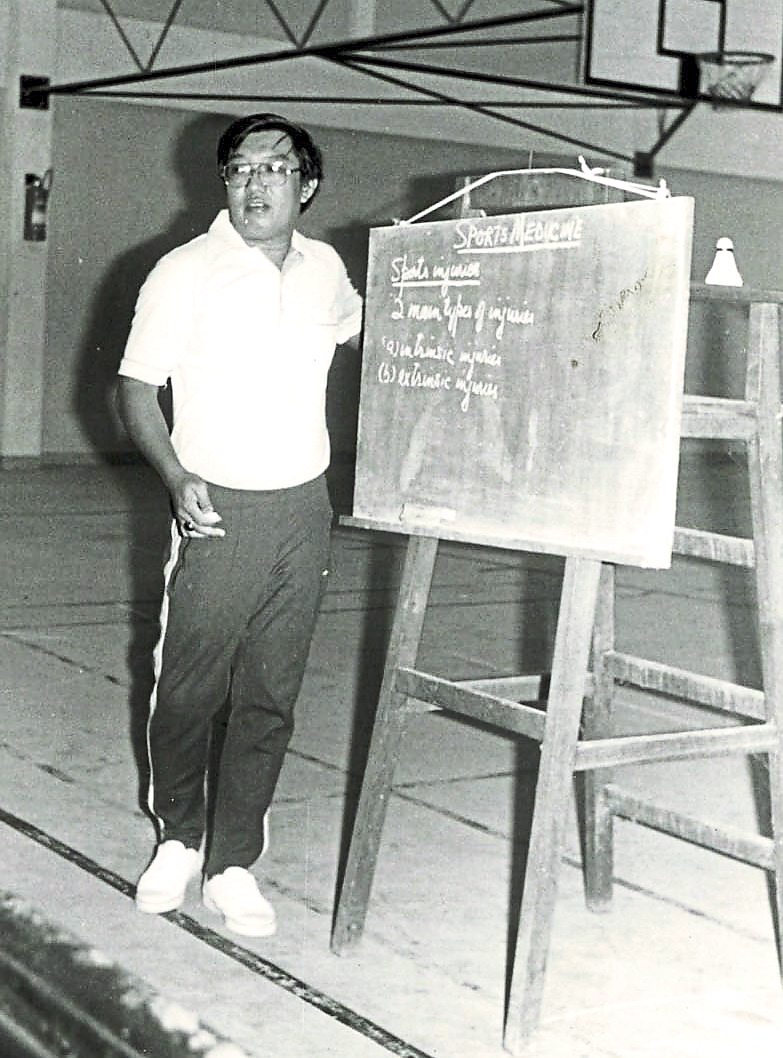 Imparting knowledge: Yong delivering a coaching course at the height of his involvement with the CTC’s programmes in all the Malaysian states including Sabah and Sarawak.


Yong also conducted coaching and training courses all over Malaysia and together with Punch presented lectures for Asian and European coaches in Beijing in 1971 on how best to develop top-flight doubles combinations and unearth singles talents and fast-track them to their fullest potential by the time they are 18-year-olds.

“To rectify the bleak situation prevailing at this time, we need to enhance development, training and coaching programmes at the state grassroots level. In this respect the nation’s top coaches under the purview of the Badminton Association Malaysia (BAM) should be deployed to the various states to work on the younger set of players.

“Now, they seem to be going through the motions of where the finer aspects and facets of the game seem to be neglected”.

“There is little point in having top flight coaches handling seniors. It is those grassroots talents that need the best coaching and training expertise,’’ he said.

The CTC’s responsibilities and functions were to undertake coaches’ education and training aspects of the game.

This includes drawing up a training syllabus for coaches, to conduct basic and high-end coaching courses and to prepare beginner coaches for theory and practical examinations as trainees coaches.

The organising of regular seminars to update coaches on the latest and updated coaching and training modules also came under the purview of the CTC then, Yong revealed.

Meanwhile, Khoo, who retired from teaching late last year and was formerly a skipper of the state cricket team in the seventies, plans to go into coaching school players full-time.

Backed by the Victoria Cricket Association and the Australian Cricket Council Level One coaching credentials as well as being an international qualified umpire, he strongly believes that five strategic priorities if embarked upon effectively will induce a broad-based cricket development programmes in schools.

“The strategic priorities include the introduction of a management structure that will provide for systematic and effective administration for the development of local cricket.

“The provision of good facilities as well as coaching stints will also attract the game’s young talents and potentials from all over the state including the districts,’’ he added.

The priority should be on developing a strong and viable inter-school and inter club competitive system with regular year-round domestic competitions as well as participation at national age-group and senior inter-state competitions.

All these factors can yield success with the co-operation and collaboration of the local cricket association, state sports council and the state schools sports council.

Also on the cards is the improvement of local coaches, umpires, curators and game administrators while ensuring the game is backed by a strong and sustainable financial base, said Khoo.

The Malacca cricket scene was at its height from the 60s to 80s with no less than a dozen schools and clubs involved in local senior and junior leagues, knockout and limited-overs competitions.

In fact Malacca and Selangor were declared joint champions of the prestigious Malaysian Cricket Association inter-state senior league in 1972.

“There has been a cricketing revival of sorts in several primary schools and also universities and colleges of higher education in the state.

“However, it is still early days yet.

“Once the proposed blueprint is implemented systematically, the game in schools and at club levels will see a new lease of life,” Khoo said.