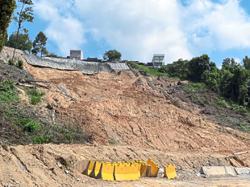 A dislodged underground sewerage pipe is believed to have triggered the latest incident of soil erosion at Taman Bukit Permai/Taman Mega Jaya in Ampang Jaya.

THERE is a need to realign underground pipes in Taman Mega Jaya and Taman Bukit Permai, Ampang Jaya, to prevent more incidents of soil erosion on an already compromised slope.

Ampang Jaya Municipal Council (MPAJ) councillor Mohamad Samat said soil erosion that occurred in the Teratai constituency on Dec 2 was triggered by an underground sewerage pipe which had burst.

Fortunately, there was no damage to property and no evacuation was required.

The latest incident occurred on the same slope where a massive landslide happened in March.

“The soil erosion on the slope at Jalan Mega 13 happened when the underground pipe had dislodged and softened the topsoil.

“Following this incident, a meeting between the agencies including MPAJ, Public Works Department (JKR) Slope Unit and Indah Water Konsortium (IWK) Sdn Bhd have determined that these pipes need to be realigned and moved out of the hazard area.

“The agencies will be coming up with short and long-term plans on how best to execute the realignment,” he said when contacted. 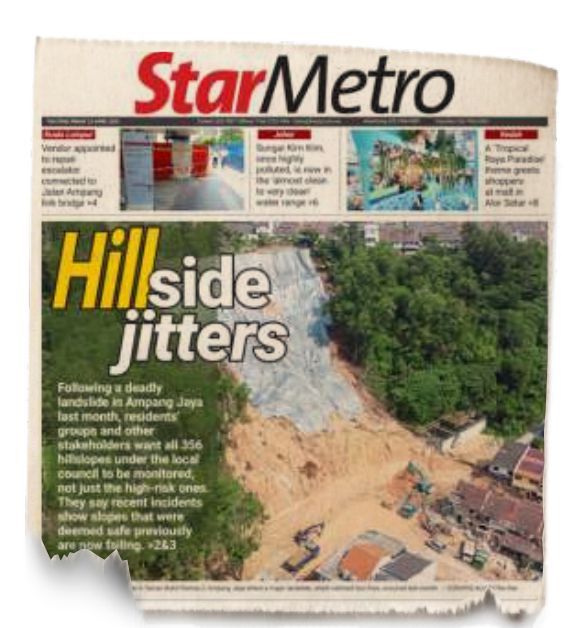 Meanwhile, MPAJ president Mohd Fauzi Mohd Yatim said the council with Malaysian Institute of Public Works (Ikram) and IWK had inspected the site and found that a sewerage pipe had detached and burst, while a manhole was damaged.

“IWK has taken immediate action to repair the pipe and the sewerage pipe bypass work has been carried out.

“The surface has been covered with tarpaulin sheets to prevent further erosion,” he said.

Mohd Fauzi added that Ikram, as the contractor undertaking slope mitigation works following the previous landslide incidents, would be carrying out further inspections on the damaged slope for permanent repairs.

On March 10, slope failure led to the massive landslide, forcing the evacuation of residents from Taman Mega Jaya and Taman Bukit Permai. Fifteen houses and 10 vehicles were damaged in the incident.

On March 12, another landslide occurred at the same site and residents from another 22 houses in Jalan Bukit Permai 1 were asked to evacuate.

In July, StarMetro reported that soil erosion on the same slope, some 100m away from the site of the landslide, buried an excavator that had been left at the site.

According to MPAJ, rectification works on the portion of the slope damaged during the March landslide was currently around 80% complete.

Sensors have been placed at the top of the slope to detect any ground movement as repair works are ongoing.

Living in fear of slippery slopes