EC officers placed plywood boards on the soggy football pitch at Kampung Kerinchi on polling day on Nov 19, but this had damaged the field. — Photos: FAIHAN GHANI/The Star

THE Election Commission (EC) will cover the cost of repairs for two football fields in Lembah Pantai, Kuala Lumpur that were damaged on Nov 19 – polling day for the 15th General Election.

Following this, the commission has agreed to pay for repairs.

“They can either engage their own contractors to carry out the repairs, or let us do it and we will bill them for the work,’’ Mahadi told StarMetro.

Both fields belong to DBKL.

Mahadi said the fields were in bad condition after thousands of voters spent hours standing and waiting on the grass during polling day, and incessant rains had worsened the situation.

The EC had defended its decision, saying it was made to accommodate an increase of 10,000 voters in the area. The football field at PPR Kampung Kerinchi is in an extremely poor state, after the EC used it as a polling station during GE15.

On polling day, many voters complained about the soggy, mud-covered fields, lack of proper facilities like seating for the elderly and a haphazard system with queues that snaked several hundred metres, resulting in some leaving without casting their votes.

This is the first time the EC had identified football fields for polling stations and placed thick boards on the ground leading to tents.

When contacted, a staff member from the EC’s Kuala Lumpur office confirmed that it would be paying for the repair works with DBKL handling the job.

Meanwhile, Kampung Kerinchi residents expressed their relief upon hearing that the fields would be repaired.

“My heart broke when I saw the condition of the PPR Kampung Kerinchi football field recently. It was so bad,’’ said Sulaiman Basri, who lives nearby.

“My children come here all the time to play, it is the only place we have for children to play and exercise,’’ the 37-year-old TNB contractor added.

Kindergarten employee Siti Salmah, 25, said she often jogged at the field in the evenings.

“I had to stop during the rainy season since it was always soggy and muddy.

“But I am glad DBKL is fixing it up.

“I will definitely use it if the weather permits,’’ she added. 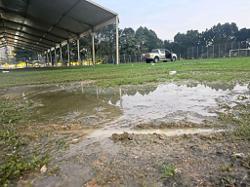