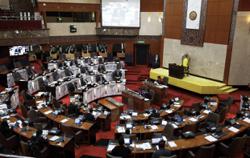 “Saari is wheelchair-bound and has mobility issues," Ng said on the sidelines of the assembly sitting on Monday (Dec 5).

"So we’re trying to make things easier for him based on compassionate grounds and accessibility, hence the new arrangement."

The section where assemblymen sit in the legislative assembly building in Shah Alam is designed in a tiered, circular layout.

Saari’s seat, which was previously on the lowest tier opposite the Speaker’s seat, is now on the highest tier, near the Opposition bloc.

“This will be a permanent arrangement for Saari, and will continue at the next state assembly sitting (next year).

“This is also part of our effort to make our building more accessible to persons with disabilities,” he added.