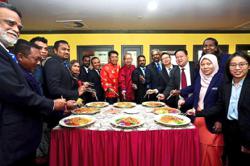 Banners put up in residential areas to remind people of the dangers posed by dengue. The current rainy weather has seen more cases in the Hulu Langat district. — AZHAR MAHFOF/The Star

The overall number was 31,822 with eight deaths as of Nov 19 or epidemiological week 46.

“The number of dengue cases in Hulu Langat had increased by 13.8% this year compared to the corresponding period in 2021,” said Kajang Municipal Council (MPKj) president Najmuddin Jemain during the full board meeting.

“Hulu Langat has seven mukim, and one is under the jurisdiction of Ampang Jaya Municipal Council.”

Najmuddin said there were 5,730 accumulated dengue cases under the administration of MPKj with four deaths.

He added that there were seven hotspots, namely Balakong (four), Kajang (two) and Semenyih (one).

“For hotspots that have been on the list for too long, our task force works together with the district health office to address the issue,” he said.

On a separate matter, Najmuddin said MPKj has fulfilled all 11 criteria or requirements for Kajang to be upgraded to city status.

He said the municipal council had submitted a proposal to the Selangor state executive council on the matter.

“In the meantime, we will prepare all the necessary documents.

“Hopefully, by the end of the year the state executive council will decide if our application can be forwarded to the Housing and Local Government Ministry,” he said.

In anticipation of obtaining city status, MPKj plans to carry out a rebranding exercise on all its assets, added Najmuddin.