A CIVIL servant filed a case with the Johor Baru Consumer Claims Tribunal after a used car dealer refused to return his booking fee.

He went to a used car dealer in Senai on April 20 to book a Japanese-made MPV and paid a RM2,000 booking fee.

He said the salesman who attended to him on that day told him the selling price of the Selangor-registered MPV was RM83,000.

“I submitted an application for a loan to buy the vehicle and after a few days, a bank officer informed me that my application had been approved for RM68,000,’’ he said when met outside the tribunal.

Muhammad Faiz then went to the car dealer to inform them that his loan had been approved and he would take the vehicle after signing the necessary documents.

“But the salesman who attended to me in April told me that the MPV was sold to another customer from Pahang who paid cash for the vehicle.”

He said the salesman suggested another Japanese-made seven- seater MPV of a different model but with the same price tag of RM83,000.

Muhammad Faiz said that after discussing the matter with his family, they did not want to proceed with the second choice as they preferred the first model.

“I also checked with other used car dealers and found that their price tag for the two MPV models was lower at only RM53,000,” he said.

He then told the dealer that he had decided not to proceed with the purchase and asked for a refund of the booking fee.

However, Muhammad Faiz said the company declined to return the money, citing that the bank had already approved his loan.

The respondent told tribunal president Abd Rashid Daud that the claimant had cancelled his order for the first model after claiming that the price tag was too high.

“So we sold the MPV booked by the claimant to a buyer from Pahang.”

He said the company would give a 30-day grace period for customers who paid a booking fee for any used car to obtain a loan.

However, the respondent failed to give a reason when asked by the tribunal president why the company had decided to sell the MPV to the Pahang buyer although the claimant’s bank loan was approved within the 30-day period.

“At the same time, the claimant did not sign a hire purchase agreement with the company to buy the second model,’’ said Abd Rashid.

He ordered the respondent to return RM1,800 to the claimant within two weeks after deducting RM200 as administrative expenses to process the loan application. 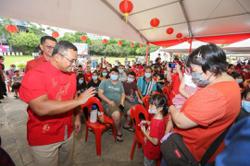