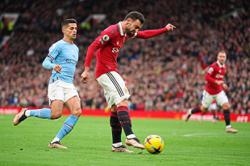 Red Devils manager ten Hag (second from right) with his staff during a training session at the Aon Training Complex in Manchester. – Reuters

THERE are no top-six team clashes this weekend, but the fixtures do have a line-up that could throw up one or two hefty upsets.

West Ham United’s visit to Old Trafford for a clash with Manchester United certainly has the potential for one such surprise.

All the same, it is highly unlikely that the Red Devils will lose this one. Indeed, despite a recovery in form to some degree by the Hammers, the home side should win, perhaps even with a clean sheet.

David Moyes’ charges endured a difficult start to this campaign that came on the heels of a season in which they punched well above their weight.

They have climbed up to 10th in the Premiership standings and qualified for the knockout stage of the UEFA Europa Conference League, with some spare in the tank.One would think they should go to Manchester and really rattle Old Trafford. But in reality, they may find themselves in for a tough afternoon.

Erik ten Hag’s side, which include Cristiano Ronaldo back in the squad after his latest tantrum, are playing with a renewed sense of purpose and West Ham may yet feel the effect of that.

Their draw with Chelsea last weekend and the UEFA Europa League group stage match on Thursday aside, they have shown good enough form to be considered legitimate contenders for a top-four finish, something they failed to achieve last season.

They will be without Raphael Varane, reportedly until after the World Cup. The Frenchman has linked up tellingly with Lisandro Martinez in central defence – a combination that has been widely credited with steadying the Red Devils and gone a long way in making them a lot more difficult to beat.

Victor Lindelof is expected to step into his role.

The Hammers, who were 17th on the log before the start of last weekend’s fixtures, have lost only once in seven matches across all competitions since Oct 1.

Jarrod Bowen could be West Ham’s trump card tomorrow and Man United might want to keep an eye on him.

West Ham will no doubt want to consolidate their standing in the Premier League and do it at the expense of Man United, which should make for a spicy encounter.

League leaders Arsenal are at home to Nottingham Forest.

The visitors are coming off a win over Liverpool and will believe, using that as inspiration, that they can topple the Gunners too.

They may well do so, but one should also be mindful that Arsenal have been a lot more consistent than Liverpool – something which has quite rightly left them perched at the top of the table.

A victory in London tomorrow would surely lift Steve Cooper’s team off the bottom of the standings.

One to watch in this side is Taiwo Awoniyi. The 25-year-old Nigerian, who joined from Union Berlin this season, is an exciting talent and could give the Gunners a run-around if they allow too much space upfront.

Manchester City, who were held to a draw by Borussia Dortmund in midweek in the Champions League, should keep the pressure up on Arsenal with a win at Leicester City.

The Foxes are just two points off the relegation zone and are more than likely to find the champions too strong to beat, even if Erling Haaland is out through injury.

But this game too, is one of those that could register a colossal upset.