Iskandar Puteri City Council (MBIP) has given out RM440,000 to fund 31 projects as part of its Low-Carbon Community Grants programme.

MBIP president Datuk Mohd Haffiz Ahmad said the 31 were chosen from a total of 121 proposals submitted this year.

He said the bulk of the funds went to programmes related to farming and food security; eight projects in this sphere were given a total of RM136,000.

“The response for this year’s grants programme was better than last year’s where 14 projects were given a total of RM168,000.

“The main aim of the programme is to increase awareness of sustainable practices and get the public to help shape a low-carbon society in Iskandar Puteri,” Mohd Haffiz said after launching a recyclable waste drop-off station at Sunway Grid Residence in Iskandar Puteri, Johor.

The drop-off station was among the projects that received MBIP’s grant worth RM16,000.

“It is also the first of its kind to be set up at a strata residential area.

“This not only provides residents with convenience when recycling their waste, but also increases their involvement in sustainable waste management,” said Mohd Haffiz.

He expressed hope that the recyclable waste drop-off station, managed by the residence’s joint management body, would be an example for others.

Apart from the drop-off station in Sunway, there are three other recycling stations set up through the grants programme in Iskandar Puteri namely Presint Bestari in Taman Mutiara Rini, Kenari Flats in Kangkar Pulai and Taman Impian Emas Utara 6B in Johor Baru. 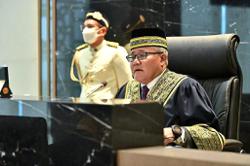