Residents of Taman Cheras Prima in Kajang, Selangor, are upset over potholes in the neighbourhood and urge the local authorities to take immediate action.

They blame the problem on heavy lorries that use the roads in the area daily and want Kajang Municipal Council (MPKj) to resurface the roads.

MPKj Zone 7 councillor C. Sangeetha said she had taken the matter to the council after receiving many complaints from locals.

“MPKj has opened a tender to undertake the repair works and a contractor is expected to be appointed in a week.

“As for complaints about heavy vehicles, residents are advised to report the matter to the Road Transport Department.

“The council has no authority over transport matters,” she said, adding that resurfacing works could take some time.

“The potholes are along the 3km stretch from the adjacent Taman Sutera housing area to this neighbourhood,” he added.

Earlier, residents gathered to launch a newly built cabin container at a vacant lot next to Surau Al Amin in Jalan Cheras Prima 3.

Built at a cost of RM14,000, the cabin is meant to be used as an office by the residents association and to store documents.

Rapolla said he applied for the cabin in August, as residents had been using the surau as a meeting point.

Sangeetha hoped that the cabin would serve as a central point to organise meetings and community programmes in the area.

“The residents no longer have to use the surau, which was not suitable, as it is a place of worship,” she added.

Balakong assemblyman Wong Siew Ki was present to hand over the key to Rapolla, who was accompanied by surau secretary Ishak Ayub.

Wong expressed hope that the association would remain active for the benefit of the local community. 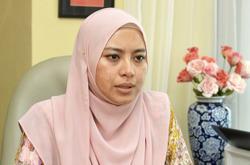