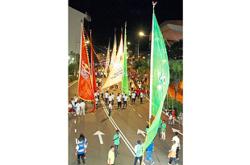 A dragon dance performance adding a touch of Malaysian culture to the parade.

THE Penang Yosakoi Parade returned with an exuberant display of multiculturalism.

Its line-up of Japanese street dancing and cultural activities supplemented with Malaysian artforms like chingay, dragon dance and silat, thrilled thousands of festival-goers.

Event co-organiser Pink Hibiscus Club president Emi Yamazaki said they were grateful to be able to hold the event again, adding that “the word yosakoi means come at night”.

“This year, it is extra special as it is in conjunction with Malaysia Day. This community effort really brings everyone together,” she said.

It was the first since 2019, as the pandemic forced its cancellation in 2020 and 2021. The return to normalcy allowed it to make an eagerly awaited comeback, albeit at a different venue.

Held at the Esplanade since its debut in 2013, it was switched to Karpal Singh Drive this year but the atmosphere was just as merry.

“The Penang lifestyle is exemplary. We are peace-loving and believe in unity in diversity. I’m proud of how everyone works together for the common good of the state we love,” he said in his speech.

Consul-General of Japan in Penang Hiroyuki Orikasa shared that Yosakoi originated in Kochi on the island of Shikoku in 1954 but had since spread to over 200 locations across Japan and also 33 countries around the world.

It was brought to Penang by the Japanese expatriate community as a way of thanking Malaysians for their solidarity and support in the aftermath of the March 2011 Tohoku earthquake.

“The beauty of Yosakoi is its inclusiveness. Anyone can participate and create unique routines by choosing their own outfits, music and more to complement the Japanese elements,” he added.

Orikasa, Chow and Yamazaki were later joined by organising chairman Lim Siew Khim and other dignitaries in dancing along to the Penang Sakura Ondo, a song that celebrates the state’s harmony, heritage, food and nature.

Lim, who is also Sungai Pinang assemblyman and whose office co-organised the event, said such festivities could help heal lives and livelihoods now that the worst of the pandemic was over.

More importantly, it could be enjoyed by everyone regardless of colour or creed.

This was seen in the 17 participating Yosakoi dance teams which comprised over 600 dancers.

After Miss Penang Yosakoi 2022 Christine Vong and the 2020 winner Nathalie Hong started the parade, they took to the street to show off their well-choreographed routines.

Enko group from SM Sultan Abdul Halim in Kedah was once again declared the overall champion, winning their third title and defending their crown from 2019.

“Learning about different cultures is a good thing, as it allows us to better understand other people. We’re also grateful to our principal for supporting us in this,” Kunurain added.

The night ended with the Mizukake Mizoshi, or water splashing finale.