SUBANG Jaya City Council (MBSJ) has mapped out its action plan in anticipation of year-end floods, including identifying safe places for people to park their vehicles and 60 premises to serve as temporary evacuation centres (PPS).

“The parking spaces are located on higher ground and will be monitored by MBSJ personnel to ensure they remain safe,” said mayor Datuk Johary Anuar after the city council’s full board meeting.

“Each building can accommodate between 50 and 500 people.

“We will try to relocate victims to the PPS nearest to their homes, as many are concerned about distance and safety of their properties,” he said.

Johary said these measures, along with several others worked out closely with other government agencies, were among improvements to the council’s emergency response plan following last December’s floods.

“The Welfare Department (JKM) will be temporarily utilising three of MBSJ’s community halls as storage space between this month and March 2023, in anticipation of the northeast monsoon during that period,” he said.

“They will be storing items like dry food and mattresses, which will be distributed should the need arise.

“This is to ease the logistics and aid distribution process, as JKM Petaling’s office is located quite a distance away in Sungai Buloh,” he added.

“We have also improved our communication channels and early warning indicators this year,” said Johary.

“There are WhatsApp chat groups with participants comprising MBSJ personnel and community leaders such as residents representative council (MPP) members and village chiefs.

“MBSJ will channel information and updates to these chat groups, and alert them on the need to evacuate should the water reach dangerous levels,” he elaborated.

On the early warning indicators installed in flood-prone locations, Johary said six more were added this year, bringing the total number to 10.

“The early warning signals are linked to MBSJ’s Command Centre.

“The system will alert our command centre if the water reaches ‘caution’ level.

“Then they will send messages through the WhatsApp channel for people to evacuate at ‘warning’ level, before the ‘danger’ level is reached,” he said.

There are five flood hotspots within MBSJ’s jurisdiction, including Bukit Lanchong, Kampung Sri Aman and Kampung Tengah in Puchong.

However, Johary said the city council had also identified new areas such as Taman Kinrara 1 and 2 and Taman Paik Siong in Puchong as flood-prone zones.

“We held a two-day water rescue simulation session with the Fire and Rescue Services Department about a week ago to ensure our team is ready in terms of assets, facilities and personnel,” he said.

“We will hold discussions with all relevant government agencies like the police, JKM and highway authorities plus private organisations on Oct 5 to table a comprehensive action which includes mapping of flood hotspots,” he added.

The routes connect users to other public transportation systems such as LRT, BRT and KTM Komuter lines as well as major commercial centres.

“This will benefit those from B40 communities, as they can save on school bus fees and reduce their household expenses.

“This transport service, provided by the Selangor government in collaboration with MBSJ, is also an initiative to make Subang Jaya a low-carbon city,” said Johary.

He added that the Smart Selangor bus service under MBSJ had ferried close to 11 million users and cost RM36.5mil to run since it was introduced in 2015.

The rides are free for Malaysians.

The MBSJ full board meeting was held using a hybrid method with some councillors attending online as they were travelling for an overseas working trip. 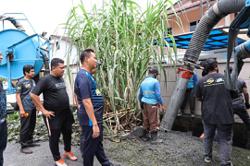