PUTRAJAYA residents are getting help from the police in tightening security and conducting more effective neighbourhood patrol.

This is in light of a spate of armed home robberies in the country’s administration capital in the past two months.

Putrajaya OCPD Asst Comm A. Asmadi Abdul Aziz said the police had been meeting the residents and Voluntary Patrol Schemes (SRS) in the neighbourhoods to advise them on how to keep their homes more secure.

During these engagements, the police observed that some residents left their grilles and windows open, and did not have additional locks to secure their homes at night.

“Such houses are easy targets for robbers.

“We hope the residents will be more vigilant in securing their homes,” said ACP Asmadi.

“The modus operandi was similar, with the robberies taking place between 3am and 4.30am when the occupants were fast asleep.

“The parang-wielding robbers would gain entry through the side door, back door or windows.

“The occupants were then tied up and robbed of their belongings,” he said.

While the police are investigating the cases, ACP Asmadi said they were also working with Putrajaya Corporation (PjC), property management division (BPH) of the Prime Minister’s Department, and the National Unity and Integration Department (JPNIN) to look at other ways to increase security in the neighbourhoods.

He said BPH had agreed to improve the lighting with LED bulbs, instal more closed-circuit television cameras and replace the house grilles in the affected areas.

“Meanwhile, JPNIN agreed to provide more facilities for the Voluntary Patrol Schemes because more people have shown interest in joining the community initiative,” he added.

Zone 6B Precinct 11 Rukun Tetangga (RT) chairman Mohd Norhadi Rosli attended one of the many meetings held by the police.

He said people were worried for their safety.

“I am also a SRS volunteer.

“In the past month, we have been recruiting members to patrol the neighbourhood.

“Other RTs are doing the same.

“We are very appreciative of the increased police presence and efforts taken by various agencies in light of the situation,” said Norhadi.

In a Facebook post, PPj president Datuk Fadlun Mak Ujud said besides the infrastructural improvements, they had also been in discussions with the police to identify the “rat routes” around Precinct 11 to secure them better. 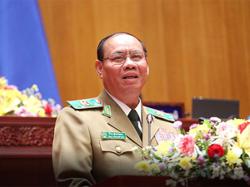