Malaysia Crime Prevention Foundation (MCPF) wants to create more awareness on online scams so that people will not fall victim.

“Victims have lost hundreds of million ringgit this year. If we add losses from previous years, it will run into billions of ringgit,” he said.

Ayub said what’s worrying was that even professionals fell into the trap.

“Despite being aware that the call is from a scammer, people still start a conversation.

“The best is to cut off the conversation by switching off the phone,” he said.

He noted that there were people who out of curiosity still entertained scammers to hear their “too-good-to-be-true” offers.

“If you receive a call purportedly either from the police, or with a loan offer or that you have won a prize, don’t entertain it,” said Ayub, who is former Crime Prevention and Community Safety Department director. 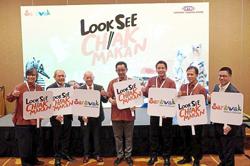