Former SMJK Slim River students catching up with one another.

A GROUP of 28 former SMJK Slim River students were reunited in a joyous gathering in Ipoh, Perak, after 52 years.

Hugs were exchanged and memories rekindled among the friends from the Class of 1970, who are now between 68 and 70 years old.

They came from various parts of Malaysia and Singapore.

The group also took a photograph together in a studio owned by one of them.

Retired lecturer Shamsul Abdullah, 69, said he and several others mooted the idea for the get-together early this year.

“It started with only five of us,” he told StarMetro during the gathering at a cafe in Slim River.

“We slowly reached out to the others and were able to contact almost 30 people and tried to get them to come for the reunion.”

He said everyone had moved to different parts of the country after leaving school.

“Some continued their studies while others joined the workforce early, as all of us pursued our dreams and goals.

“We were separated not only geographically but also socially and emotionally,” he said.

“As years became decades, memories of our school days began to come back and we yearned to reconnect with old friends,” he added.

Shamsul, who now lives in Ipoh, said those who attended the gathering went home feeling refreshed.

“It has been said that meaning is found in relationships, as this reunion demonstrated.

“We also invited our former class teacher and were delighted that she could join us.

“Joy lingered in our hearts after the reunion,” he added.

Ng Kaa Teck, 70, who works in Singapore, said he was touched by Shamsul’s efforts to gather so many former schoolmates for the reunion.

“It was a joy to see so many faces. I am thankful to Shamsul and also Wong Yim Heng who organised the food and photography session,” he said.

“One of them hugged me and asked about my well-being,” said the 69-year-old who now stays in Ipoh. — By IVAN LOH 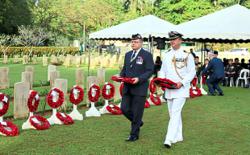