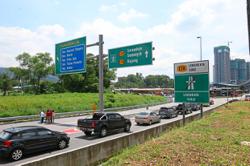 Motorists complain the SUKE divider running parallel Jalan Cheras has added another stream of traffic turning left into Jalan Medan Masria on top of the ones from Jalan Cheras. Filepic

In a statement, SUKE concessionaire Projek Lintasan Kota Holdings Sdn Bhd (Prolintas) said its operations division and its appointed consultant were in talks with Grand Saga to review the design to convert the ramp that led to the CKE at the General Operations Force (PGA)/Jalan Medan Masria traffic lights, into two lanes.

“It may be possible to expand the present single lane at the ramp into two lanes. This will help reduce the queue period and will result in more vehicles being able to exit from the ramp at one time.”

Both parties will also review the overall configuration of traffic lights, including the one near Maktab PDRM.

On Sept 23, StarMetro in a news article titled “Motorists irked by added traffic on Jalan Cheras” had highlighted the issue of congestion on the main road. Those who regularly used that road complained of bad congestion caused by traffic lights at a new junction and a road divider in the area built to complement SUKE.

“Two units of ‘no right turn’ signage are to be placed 200m from the junction to CKE and one at the junction to warn road users not to make a right turn that can cause traffic to slow down, which will eventually lead to traffic backlog,” added Prolintas in its statement.

The signage are expected to be installed this week.

A yet-to-be-open slip road about 400m long from the St Francis of Assisi Church at the 7th mile of Jalan Cheras to Jalan Medan Masria is also expected to help ease traffic in the surrounding area.

In a separate statement, Prolintas explained that the slip road was currently partially constructed with 200m left to be finished. It is expected to be completed by end of February 2023.

It said the hold-up in completing the slip road was due to the delay in decommissioning of the old FRU sewage treatment plant (STP) which formed part of the overall Langat Centralised Sewage Treatment Plant and Sewer Conveyance System Project by the Sewerage Services Department.

“All the actions carried out will feasibly provide convenience for all SUKE Expressway’s users and ease traffic at the surrounding connecting roads.

“We take note of all the concerns and are continuously working with relevant parties to serve users with comprehensive solutions,” said the statement.