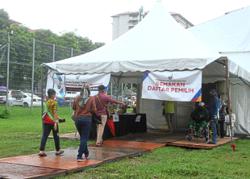 THE group of Kuala Lumpur residents who were planning to sue Kuala Lumpur City Hall (DBKL) over its flood mitigation plans has accepted the offer to be briefed on the matter.

This was after Federal Territories Minister Datuk Seri Dr Shahidan Kassim (pic) on Sunday (Sept 25) said he was prepared to meet the group.

In a statement on Tuesday (Sept 27) by their lawyer Lim Wei Jiet, residents said they were prepared to have a townhall session within the next two weeks.

"This will provide an avenue for both parties to have a two-way discussion on the information we requested about flood mitigation measures.

"It is important for this discussion to take place openly and in public as everyone is entitled to such information," it read.

The letter further stated that DBKL should assist by providing the venue for the meeting with sufficient time to prepare.

It added that the earlier letter of demand was initiated to seek transparency on the status of DBKL’s flood mitigation plans.

Earlier last week, the group had planned for a lawsuit to compel DBKL to give detailed updates on its plans to deal with floods ahead of the upcoming monsoon seasons.

They said the DBKL’s Flash Flood Action Plan 2022, that was revealed in May, did not contain sufficient information for a meaningful engagement by public.

They added that the plan was drafted before the Auditor-General's report was released in August 2022, and thus failed to account for multiple weaknesses identified by the report.

"It is an outdated plan which is inadequate to deal with the incoming monsoon season," said Lim in the statement.

Shahidan, then, in response, said the flood mitigation measures had undergone audit and that some of them were already completed while others were ongoing.

"But if they want to take the legal route, to get everything in black and white, and seek publicity by going to court, we will respond legally," he noted.

It is unclear if the residents group will still proceed with their lawsuit against DBKL now.