A van partially swallowed by a sinkhole in Jalan Kepong.

A SINKHOLE appeared on Jalan Kepong, Kuala Lumpur at about 6am Friday (Sept 23), partly swallowing a van.

The van driver, who asked to be identified only as Kuah, said he was driving towards Sungai Buluh when he realised that the rear of the vehicle was sinking.

“I got out of the van to safety. There was a lot of water on the road,” he said.

“The cause of the sinkhole has not been determined but there was a lot of water coming out of it.

“The police, Fire and Rescue Department, Kuala Lumpur City Hall and Air Selangor were quick to respond and their officers were on site to look into the situation. 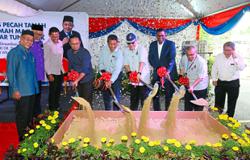