Bangkuai checking out local cuisine at the cultural networking programme.

The chance to taste local cuisine was one of the highlights of a cultural networking programme in Kota Kinabalu, Sabah.

The traditional dishes including ambuyat (sago-based food) and ikan masak ampap (a type of fish dish) were prepared by pupils and teachers from nine primary schools in the Likas area.

One of the programme’s objectives was to showcase Sabah’s unique culture and food to visitors.

These activities served to further promote the beauty of Sabah’s diverse cultural heritage.

Sabah Tourism, Culture, and Environment Assistant Minister Datuk Joniston Bangkuai, who opened the event, said programmes like these had the potential to help children discover their unique cultural gifts.

“It will also help foster a deeper appreciation for Sabah’s cultural heritage and food, and promote better connections to their own cultural traditions.

“Through such initiatives, these pupils will have a better opportunity to appreciate the distinctive cultures that exist in this state.

“It will open their minds further as I am certain that those who participated in the traditional performances come from different ethnic groups,” Bangkuai said.

He said the efforts of educators in making the programme a success should be applauded.

“Our priceless cultural wealth is definitely represented here by the staging of traditional performances,” he added.

Bangkuai hoped similar programmes would be held in the more than 1,200 primary and secondary schools in Sabah. 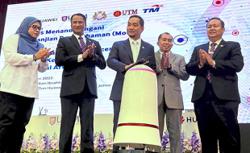