Care for us too: Deer are less popular than tigers and pandas as a choice among Zoo Negara’s animal adopters. — AZMAN GHANI/The Star

Zoo Negara is continuing its adoption and sponsorship programme to improve conditions for its 5,137-strong population.

DURING the movement control order, Zoo Negara appealed for help to feed its animals.

It posted a picture of a stag beetle which caught the attention of Malaysian rapper Wee Meng Chee, popularly known as Namewee.

He reposted it and urged his fans to help the animals at the zoo.

In addition to the stag beetle, the rapper also posted adoption certificates issued by the zoo to him for the Malayan tapir, hornbills and Bornean horned frogs.

“I don’t really have a particular preference for those animals.

“I chose them because I thought they might not have as many sponsors as cuter animals like the panda or orang utan,” said Namewee through WhatsApp to StarMetro.

His post seems to have convinced many of his fans to support Zoo Negara’s animal adoption drive.

A check on the zoo’s website revealed a donors’ list of 447 for the stag beetle, with contributions ranging from RM50 to RM500.

Zoo Negara deputy president Rosly@Rahmat Ahmat Lana, who is also its administration and human resource chairman, recalled the stress that came with the restrictions imposed by the MCO.

“We had big problems as there was zero income since we could not open.

“We needed RM1.3mil a month to run the zoo but we only had RM1mil in the bank.

“We could stop maintenance work but not the animals’ food,” said Rosly of the national zoo located in Hulu Kelang, Ampang in Selangor.

It turned to the media to highlight their predicament. Rosly feeding a macaw at the zoo. Birds are, surprisingly, also often passed over by animal adopters.

Response from the public, as well as the private sector and government agencies was overwhelming.

“We cut staff allowances, overtime and other claims.

“But the animals did not suffer as their welfare is priority,” said Rosly.

Zoo Negara is managed by the Malaysian Zoological Society, a non-governmental organisation.

The animals’ health is checked constantly and their behaviour monitored.

“They are given their daily vitamins and are better looked after than many humans,” Rosly quipped.

“The moment anything is not right with any of them, it is immediately reported to the vet,” he said.

Acknowledging that certain animals at the zoo are more popular with sponsors than others, Rosly revealed that tigers, lions and pandas were the top three choices.

“Based on the total collection for our animal adoption programme in 2021, the top animals are our tigers Jati and Kayla that have 2,165 adopters, followed by African lions Manja, Ella and Samba with 1,298 adopters.

“The least popular was our hyena, Yellow, with 105 adopters, and bearcat Kiki with 113 adopters,” he said.

The cost of caring for each animal depends on the species and type of food consumed.

This includes the purchase of food, upkeep of the animal’s enclosure and veterinary care. 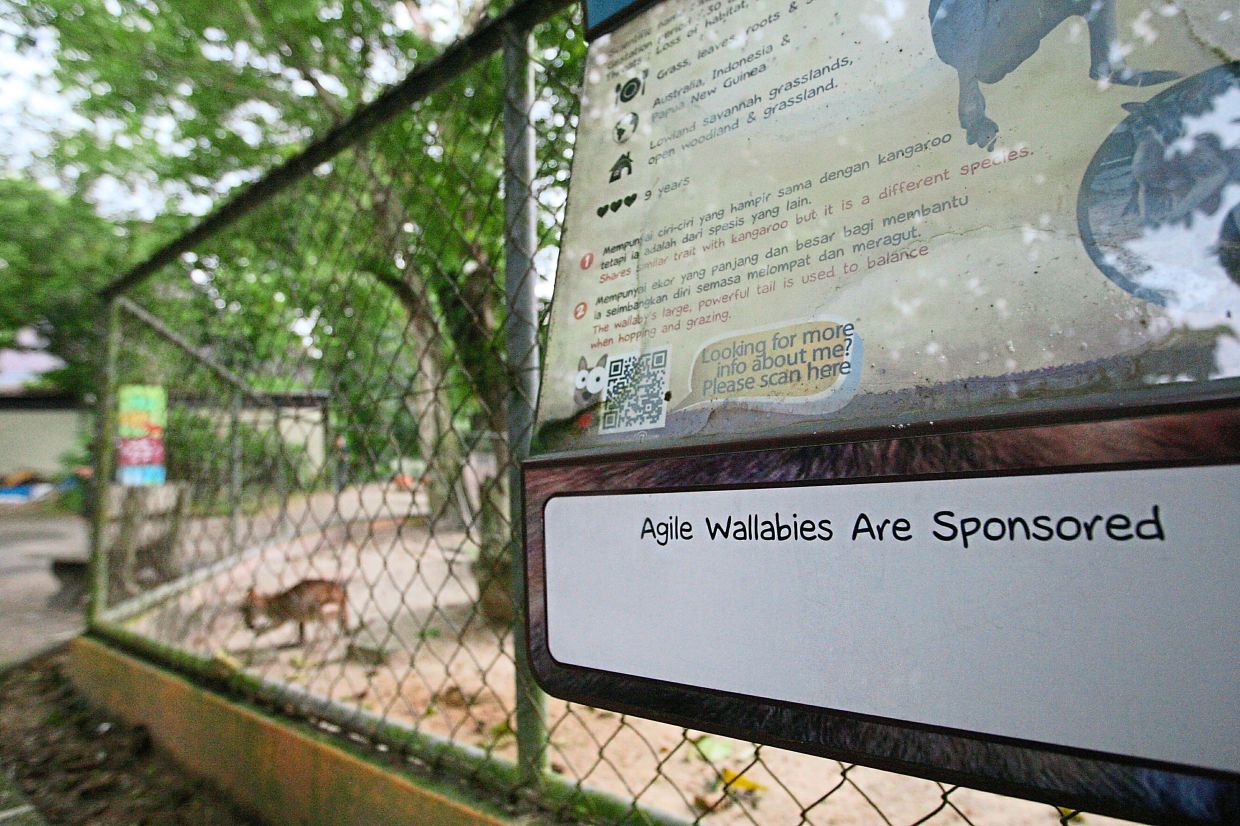 For RM12,000 a year, animal adopters can have their name and logo displayed. – AZMAN GHANI/The Star

There are seven tigers housed in the carnivore section.

“In adoption campaigns, snakes are the least popular,” lamented Rosly who keeps a cornmeal snake in his office.

“I don’t understand why snakes have so few beneficiaries.

“They don’t require much money to feed as they only eat once every two to three weeks,” he added.

The zoo currently has some 100 snakes housed in the reptile section.

Only its Sunda white-lipped pit viper has found a sponsor in a company selling food ingredients and ready-to-cook meals, which gave RM22,000.

Though the zoo’s slithery residents may not have many sponsors, well-wishers have been supplying food over the years.

Examples are the Institute for Medical Research that supplies white mice and the Fire and Rescue Department that brings snakes they have caught as snakes eat other snakes as food.

Rats caught by local councils are not accepted as they harbour bacteria.

A bread manufacturer also delivers a lorry full of bread to the zoo weekly.

Deer are also on the less popular list, along with birds, insects, amphibians and reptiles such as box turtles and a sailfin water lizard.

Fortunately for the insects family, like the Madagascar hissing cockroaches, they are housed in an insectarium for which the Energy and Natural Resources Ministry had given the zoo some RM1mil to build.

Meanwhile, a total of 22kg of fish is required to feed the bird population at the zoo daily.

“Unlike lions and tigers that can eat up to 8kg of meat a day, we have not actively sought out sponsors for our insect and amphibian residents,” said Rosly.

The zoo is currently focusing its efforts on its 18-year-old male fur seal Domba and his mate, Dombu.

His keeper Mahat Mohamed said more funds for Domba would enable the zoo to upgrade the filtration system in its pond.

Domba is the star of the zoo’s animal shows and he does his stunts in the amphitheatre pool filled with freshwater.

The show takes place daily except for Fridays unless it is a public holiday.

To keep the fur seal healthy, the saltwater pond in Domba’s private quarters has to be kept at a salinity of 28 parts per thousand.

The current filter can only maintain the salinity level for 15 days, after which the water has to be flushed out and new bags of salt added.

A new filter will enable the salinity level to be maintained for at least a month, saving the zoo the extra expense of having to refresh the pool with no fewer than 50 bags of salt weighing 40kg each.

Ideally, Domba’s private quarters should also be kept at a temperature of no more than 16 degrees Celsius with the help of an air-conditioner.

In the meantime, the fur seal is kept cool with a fan.

Rosly said experts had advised him to forgo the air-conditioner for now, since the mammal had acclimatised to the weather here.

“Once it gets used to an air-conditioner and if that breaks down, it may get sick,” he explained.

As an animal’s adoption period is only for a year, the zoo has to ensure it plans ahead to find adopters for future upgrades.

The aquarium has been identified as an area that needs work.

“We are looking to partner with other companies, as changing the aquarium and introducing new exhibits can cost RM50mil.

“That is a lot of money, so we will have to do studies on how many years it will take to make the sum back,” said Rosly.

The latest addition to the zoo is the insectarium and while Energy and Natural Resources Ministry may have sponsored the building, maintenance of the insects’ habitats as well as their replacement is borne by the zoo.

“Generally, most insects don’t live very long and have to be replenished weekly,” said Rosly.

He added that the need for regular replenishment was why the zoo chose not to have butterfly exhibits.

Thousands are needed for a good presentation, with each butterfly costing between RM2 and RM5.

The insectarium is deemed necessary for its educational value.

Rosly said companies and individuals who continued to support the zoo’s sponsorship and animal adoption programmes would receive adoption certificates and vouchers for entrance into the premises.

Donors who give more qualify to have their names on the zoo’s website, social media posts and displayed in front of their adopted animals’ enclosure for a year.

“Though our donations are not tax-deductible, Zoo Negara is an established brand.

“So there is a certain status that comes with being connected to our name,” said Rosly.

He cited a Datin Seri who gave RM16,000 to adopt a cheetah, a family who gave RM25,000 for two pumas, a mini market chain which gave RM123,084 for two hippopotamuses and a bank that donated RM50,000 for the upkeep of two dromedary camels.

He revealed that a large part of the zoo’s daily operations, which included staff salaries amounting to RM700,000 monthly, was supported by its gate collection which brought in RM1.3mil a month.

Ideally, it should reach RM1.5mil so that the zoo would have extra to keep aside for exhibit upgrades.

Public donations currently help with some 30% of the zoo’s operational expenses.

An animal adopter can have his name and logo displayed with a minimum donation of RM12,000 per year.

The Natural Resources ministry, through the Wildlife and National Parks Department (Perhilitan), has also allocated RM120,000 per month from January to December this year for the purchase of animal feed, medicine and supplies for veterinary services under its Animal Welfare Fund Scheme.

For details on the zoo’s animal adoption programme, go to www.zoonegaramalaysia.my/adopt.html